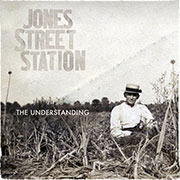 Brooklyn’s Jones Street Station have been a favorite of QRO’s since their days doing their own musical play ‘The Twelve Ophelias’ in the late McCarren Park Pool (QRO venue review).  They’re not one of the millions of variations of alt-country, or another stripped, solo, alt-folk artist, but an authentic country band that just happens to be in the Big Apple.  Last year saw them leak the strong song "The Understanding" (QRO mp3 review), and now comes the full Understanding EP.

Throughout The Understanding is an uplift that actually lifts up, neither cheesy nor ironic.  "The Understanding" does it best all around, but there’s also the warm "Grace".  JSS go soft and sweet for the spirit-country "Tomorrow Tonight", and find hope amid heartbreak in closer "Breathe".  Plus there’s a blues-ier Jones Street – so much so that it almost feels like a guest singer – on "Magician".

"The Understanding" was leaked last year to go with the release of their video for it (link), which featured Community‘s Danny Pudi (QRO photo at SXSW 2011).  Since then the band did a sold out show in L.A. with Pudi & Community‘s Alison Brie (also of Mad Men), and the band playing Brie’s place at 3:30 AM with ?uestlove in a Rolling Stone article (link).  So before they go all Hollywood (thought they were from the "Flyover State"…) or are on the bill with Childish Gambino (QRO photos), catch Jones Street Station.