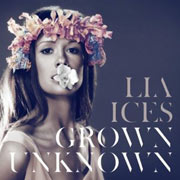 It is obvious listening to Lia Ices that her strength as an artist is in her voice.  Her voice is a sweet cocktail of fragility and ethereality.  That talent shines through on her second album Grown Unknown, along with beautifully pointed lyrics.

There is something very simple about Grown Unknown.  There is no pretence to this album, no tricks up its sleeves to woo and wow.  It is just a compilation of songs celebrating beauty.  The album itself transcends a relaxing feel to it.  It makes you want to try yoga or at least think about trying yoga.

Listening to Grown Unknown one gets a feeling of being pleasantly secluded from the hustle and bustle of city life.  There might be a reason for this.  Ices recorded this new album in a far away cabin in snowy Vermont.  The aesthetically breathtaking scenery may have something to do with the album’s haunting sound that leaves one feeling like they are floating.

The album’s breakout song is "Daphne" which was recorded with Bon Iver’s Justin Vernon (QRO album review).  The song swoons with rich melodies and Ices’ signature fragile vocals.  The song, a Greek myth, tells the story of a woman who is tragically turned into a tree.  Ices mystically sings, "Over the river runs / The wind will carry me / Call on nature now / For she will keep you safe."

Without a doubt, Grown Unknown is Ices’ breakout album.  This Brooklyn artist has proved that she has something to say and it is worth listening to.