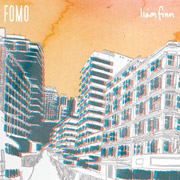 In alt-circles, little ol’ New Zealand is best known for fuzzy indie-pop like the late Straitjacket Fits or the reunited Clean, but there was also a cleaner sound in successful artists such as Crowded House (QRO live review).  Crowded frontman Neil Finn’s son Liam drew more on that lineage in his own career, combined with a sixties neo-Beatles pop from his time in London, for his 2007 debut I’ll Be Lightning (QRO review), yet there were still some more angular sounds in there as well.  Follow-up FOMO ups that ante in size if not substance, for a bigger pop album that can also sometimes grate.

While it opens on the soft, bright morning of "Neurotic World", FOMO really more goes for the out-and-out pop-hook on pieces like the following, slightly uneasy "Don’t Even Know Your Name", sixties-sway "Roll of the Eye", and fifties-sway with power-pop chorus "Cold Feet".  Unfortunately, the pieces lack some of the meat to fill out their big frame, getting a bit repetitive and even grating at times.  Similarly, the nighttime smooth "Real Late", grind "The Struggle", and reduced psychedelica "Little Words" are also all limited.  Finn does do the pop he was trying to do earlier, but better in every way, with "Reckless", and the fuzzy "Jump Your Bones" with distant & distorted vocals proves an interesting closer.

Click here for photos of Liam Finn at TT the Bears in Boston, MA on September 15th, 2011 in the QRO Concert Photo Gallery

Click here for photos of Liam Finn at Mercury Lounge in New York, NY on March 21st, 2008 in the QRO Concert Photo Gallery

There are definitely times where FOMO works, and its pieces can certainly stay in your head.  But it can also try and fail to exceed its limits, a few too many repeats of the chorus – it’s a record for a brighter morning, perhaps, and not this neurotic world.