<img src="https://www.qromag.com/wp-content/uploads/2008/12/loveisallahundredthingsSm.jpg" alt="Love Is All : A Hundred Things Keep Me Up At Night" />The Swedes bring more the same furious pace on their second album. ... 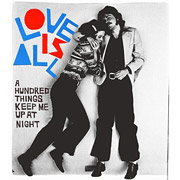 With another strong twist, Love Is All carve themselves deeper into pop-punk world with the fun and artsy, A Hundred Things Keep Me Up At Night.  Rambling percussion and frenetic brass once again provide the high energy necessary to sustain Josephone Olausson’s squelching vocals and laser-fire guitars throughout the album – all with a warming live feel.

Garnering attention for their friskiness on their debut, Nine Times That Same Song, the band shows on their follow-up that it’s their bread & butter.  Eleven tracks whiz by with the majority being uptempo art-punk anthems, with Olausson’s vocals being sharply highlighted again.  Horns and guitars swirl often swirl around each other, like on "Rumours" and their infectious melodies shine on "Wishing Well" and "Last Choice", where they throw some eloquence into the mix via the xylophone on "Last Choice".  It’s all-around fun, giving punk a cheerful side – but not without a dark side.

As always, Love Is All’s sound emanates from an underground Swedish club that’s boiling inside, as sweat drips on guitars being ripped along with a rampant beat.  They deliver another uniquely satisfying performance on A Hundred Things Keep Me Up At Night with a energy that never sleeps.

Eksi Ekso : I Am Your Bastard Wings