M. Ward, with his cornucopia of musical knowledge and styles, chisels a truly memorable record.... 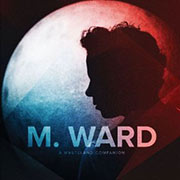 It is impossible to dislike M. Ward, although Pitchfork regularly attempts to do so when rating his albums.  He is refined, has beautiful tonal qualities, and an intuition for sculpting songs to perfection.  In their essence, the tunes on A Wasteland Companion are hardly original; but Mr. Ward, with his cornucopia of musical knowledge and styles, chisels a truly memorable record.  Moreover, there is a deep investment in musical history, evidenced from the opening, acoustic notes of “Clean Slate (For Alex & El Goodo)” – remembering the great and late Alex Chilton (QRO photo of Ward at Big Star tribute).  The cheesy “Primitive Girl” displays Billy Joel-esque piano progressions, yet Ward sings restrainedly, particularly in the resigned codicil: “It’s a wise man who can laugh at himself / With disaster at the end of the line.”

The next two pop tracks, “Me & My Shadow” and “Sweetheart” feature She & Him (QRO live review) companion, Zooey Deschanel.  The two tracks balance each other, since the former is dark murk and the latter is bright schmaltz.  “I Get Ideas” wonderfully continues that historic-pop of standard cadences, upbeat tempos and occasional lead guitar breaks – Chuck Berry, Elvis, and The Beatles combined.  Hereafter, Ward’s genuine voice begins to surface.  “The First Time I Ran Away” atmospherically lifts you up into the sky on an acoustic guitar; the all-too-short title-track, comprised of first-half delta blues, second-half Spanish guitar serenade, slides perfectly into the gritty, nocturnal “Watch the Show”.

Click here for photos of M. Ward at Beacon Theatre in New York, NY on February 3rd, 2016 in the QRO Concert Photo Gallery

Click here for photos of M. Ward at 2011 Primavera Sound Festival in Barcelona, Spain in the QRO Concert Photo Gallery

Click here for photos of M. Ward at SXSW 2009 in Austin, TX in the QRO Concert Photo Gallery

The final section shows how gorgeous Ward’s voice is, in that cracked broken-down way.  These final four tracks softly denote a wasteland that has “been shook so bad.”  The ‘choo choo’ train feel of “There’s a Key” recycles his stronger work with Monsters of Folk (QRO album review), notably “The Sandman, the Brakeman and Me”.  “Crawl After You” is a lovely piano ballad, which successfully somehow achieves an intersection of Vivaldi seasonal strings, and ‘80s glam soloing.  “Wild Goose” is possibly the loveliest song of all: full, sonorous acoustics, a steadily developing rhythm, and a yearning melody, tightly contained within two-and-a-half minutes.

Closing optimistically with “Pure Joy”, Ward sings, “It’s joy honey, pure joy just to see you again,” titillating the senses where we “See the sun coming down through the mist / The medicine of oxygen fill up my lungs like this / The strength of your kiss against my lips.”  This life-affirming song borders, as does the entire album, on trite clichés, foiled chiefly by Ward’s delicate nuance.  Accordingly, A Wasteland Companion is rich in human emotion, highlighting that clichés so often hold weight because they are inherently true, particularly given the right artistic treatment that Ward so expressively offers.