Mark Lanegan has the look that describes his vocals perfectly, as well has having the voice that many would do the deal at the crossroads for.... 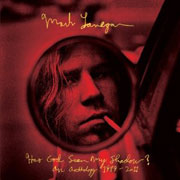 Click here for QRO’s review of Mark Lanegan at Leeds College of Music in Leeds, U.K. on November 3rd, 2013

Click here for photos of Mark Lanegan, with Isobel Campbell, at 2011 Latitude Festival in Southwold, U.K. in the QRO Concert Photo Gallery

There is a musical talent show currently on nationwide television in the United Kingdom called The Voice.  In the show, singers are asked to perform while the panel of experts face away so as to maximise the impact of the aural rather than the visual.  If the celebrity judge thinks the contestant has talent then they spin round and face the potential star.  In a parallel universe Mark Lanegan performs without the aural, and the judges have to guess what he should sound like.  The trouble with this is that they are accurate every single time; because in essence Mark Lanegan has the look that describes his vocals perfectly, as well has having the voice that many would do the deal at the crossroads for.  As he approaches his fifth decade the baritone may have dropped half an octave since his Screaming Trees-era recordings, but the gruff whiskey-ravaged baritone is essentially a constant reminder of his enduring existence.  This anthology is lifted from his six solo albums, with nothing from the aforementioned Screaming Trees or his numerous collaborations with a diverse range of artists such as, Soul Savers, Queens of the Stone Age and Isobel Campbell.  His solo work has been constantly compared to Waits and Cave (Tom and Nick) but on this record the more understated tracks such as “Grey Goes Black”, “Sunrise” and “ Mirrored” are more in the furrow ploughed by Bill Callahan in his Smog guise, certainly from the Dongs of Sevotion period of his work.  With twenty tracks plus the obligatory bonus CD of twelve previously unreleased songs, the mournful blues begins to cause a shift to a depressive mindset as the two-hour mark is approached.  The Cave and Waits shadow encroaches on a few tracks – “Come To Me” is a beautiful duet with Polly Jean Harvey that is straight from Cave’s Boatman’s Call territory.  “Lexington Slow Down” is pure swordfishtrombones-era Waits with a spoken introduction followed by Lanegan finding the extra range that lifts the track from the monotone swamp like feel of many of its compatriots.  “Shiloh Town” is a standout song that steals the riff from Tenacious D’s “Tribute”, as is “Wheels” where again his vocals climb rather than hover and plunge with despair.  Most of the bonus CD is filler apart from a resounding version of John Cale’s “Big White Cloud” and “Following the Rain”, with its couplet of “Nothing left to say and nothing left to do” sounding surprisingly positive.  If the double CD was compressed down to a single release with a more rigorous quality control applied then this would have been almost essential, but as it stands you could come out of the other side needing more than a little shot of whiskey to lift the ensuing melancholic blues.