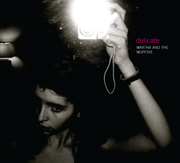 More than thirty years ago, Toronto post-punk outfit Martha & The Muffins scored an international hit with "Echo Beach", and became the first Canadian band to sign to a U.K. label.  Since then, the line-up changed up a lot, the band gave a start to their bassist’s brother, producer Daniel Lanois (later of U2’s Joshua Tree to No Line On the Horizon – QRO review), guitarist Mark Gane & singer/keyboardist Martha Johnson started their side/replacement project, M+M, the pair bought back Martha & The Muffins just as them, they had a daughter, the band went on hiatus, Johnson won a Juno for Best Children’s Album (1996’s Songs From the Tree House), EMI Canada reissued their early work, and now the band is back with their first new studio record in almost two decades, Delicate.  A curious mash-up of blues, funk, electronica and more, its singularity is often enjoyable.

Delicate kicks off with maybe its best track, "Drive", which displays a kind of dance-blues-electronica that dominates the record.  That style gets some funky diva catch on the following "Sailing Through the Light", while going more blues-funk with "Mess".  Another serious standout is "Crosswalk", which somehow manages to be anthemistic electronica – with soul…

Given its unusualness, there are also some mistakes on Delicate.  Following "Crosswalk" is the muddled blues-rock procession of "All I Know" and the short, high guitar "Blue Bed", and both pale in comparison.  In general, the back half of the album is its weaker side, ending with the decent but unnecessary subdued electronica of "Love Beings With Eve" (the one piece with lead vocals from Gane, who’s not the singer Johnson is), and the certainly unneeded "Rain Reprise", an echotronica reprise of first half beauty "Even In the Rain".

Martha & The Muffins were hard to pin down in the early eighties, but the New Wave scene of that era contained lots of bands like that.  What’s remarkable is that the (now) pair remains hard to pigeonhole today, three decades later.