<img src="https://www.qromag.com/wp-content/uploads/2010/04/mattpondpathedarkleaves.jpg" alt=" " />There's something tragic about Matt Pond PA,<span> </span>not only in the melancholy croons of unfulfilled hopes and desolate realizations in their songs, but also ... 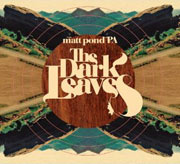 There’s something tragic about Matt Pond PA (mpPA).  This tragedy not only refers to the melancholy croons of unfulfilled hopes and desolate realizations in their songs, but also their stagnant twelve-year career.  The Brooklyn-based outfit’s lush chamber pop doesn’t quite fit into the mainstream nor garner indie notoriety like other string-loving artists like Sufjan Stevens (QRO live review) or Bright Eyes (QRO album review).  Now on their eighth album with The Dark Leaves, the eponymous singer/songwriter Matt Pond is the only stable member, yet not much has else has changed.

If you’ve just tuned into mpPA station and have fallen in love with their sound, you’re in luck because the quintet finds comfort in familiarity.  You can listen to the twelve years of toil, and find that you can easily swap out a song from The Dark Leaves with one from Deer Apartments.  While it’s difficult to argue that mpPA ever put out a lousy album, they never managed to craft a stellar one either.  But you sure can count on them to generate pleasant harmonies with all the instruments in their right place.  They’re like your best buddy who can never be your lover.  On The Dark Leaves, Pond, with a voice that sounds like adolescent Don Henley at times, but more frequently like softer David Bazan of Pedro the Lion, pleas for the listener’s attention, but his pretty little songs stay in the background.  He does not dare to break the comfort he has created with these melancholy arrangements.  Thus the tragedy of these charming tunes never becoming epic, like the majestic "Remains", yet still beautiful enough that you can’t tune it out.  It’s as if Pond has run out of drive and wants to play safe, which is a pity, considering he has all the traits and skills to make an album of similar caliber as Arcade Fire’s Funeral.

The opening track, "Starting", invites the listeners with mid-tempo tap-your-feet beats, lush harmonies aided by the cello, acoustic strumming, all culminating to one sadly beautiful pop song.  As Pond declares in a sorrowful voice, "We could start tonight / Slide back the deadbolts / Let the pictures down / They hold no life / And if you’ve got some faith then you are faithful…"  Maybe he does realize this is not his best effort to date, and perhaps is prepping his listeners for the what’s to come.  What follow is nine more songs of similar mid-tempo beat, with same instrumentation, and the weight of Pond’s sadness, that even all the hand clapping mpPA seems to favor, couldn’t cheer away.  Even on the upbeat "Running Wild", singing about feverish love, Pond’s voice betrays the carefree agenda of his characters.  With the banjo, splashed in with twang-y guitars here and there, adding little more blues to the pastoral lullabies than their previous efforts, The Dark Leaves radiates an indescribable element of maturity without progress.  And that’s neither good or bad thing for mpPA, as long as they churn out catchy harmonies.

The Dark Leaves linger in the edge of light, at the edge of life, waiting for the tragedy to become an odyssey.  If you are a loyal fan of Matt Pond PA, you’ll be thankful for another pleasant album full of pensively comforting songs to get you through the mundane part of life.

The Apples In Stereo