Maxïmo Park – Too Much Information

Maxïmo Park hits some of their highest points to-date.... 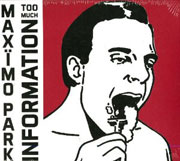 Maxïmo Park’s emotional-yet-indie Brit-rock has always had an edge on bigger countrymen of theirs like Coldplay (QRO album review) and The Kooks (QRO live review) because it’s been better executed, not simply relying on emotion to carry the day.  The group keeps that up on Too Much Information, indeed hitting some of their highest points to-date.

Opener “Give, Get, Take” has one of Maxïmo Park’s best trademarks, an upbeat press that’s energetic and vital.  That’s repeated in later piece “Her Name Was Audre”, but there are also moments where the band’s emotional reach goes very strongly, such as “Leave This Island”.  There are still also maudlin moments to TMI, “Lydia, The Ink Will Never Dry” or closer “Where We’re Going”, but they’re only relatively maudlin for them, and at least the group goes for it.  They’re even able to do the otherwise nauseating stop-start rock by going angular on “My Bloody Mind” and “I Recognize the Light”.

Maxïmo Park have built up quite a following in their native U.K., but haven’t translated as well across the pond, possibly because they’re a little too skilled to be easy consumption for American audience.  Thankfully, that hasn’t put the band off or caused them to change their ways.

Maxïmo Park – Give, Get, Take

Keith Murray of We Are Scientists