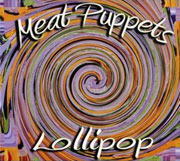 When SST O.G.’s Meat Puppets introduced country sounds to their punk on sophomore Meat Puppets II way back in 1984, ‘cow-punk’ was considered heresy, but by now, country has a firm place in alternative music – and in the Meat Puppets.  Ever since the band’s second (and still ongoing) reunion in 2006, where bassist Cris Kirkwood overcame his drug & legal problems to rejoin singer/guitarist & brother Curt (“The Brothers Meat,” Kurt Cobain called them when they guest-starred on Nirvana’s seminal MTV Unplugged episode – QRO DVD review), country has been at the forefront of their music, and that continues with Lollipop, their third record of this latest reunion.  However, the ubiquity of country in today’s indie scene has made the Meat Puppets less remarkable (as has their continued output), and Lollipop is a little too true to the somewhat colorless country we actually live in.

Click here for photos of Meat Puppets at Simon Estes Amphitheater in Des Moines, IA on May 4th, 2011 in the QRO Concert Photo Gallery

Click here for photos of Meat Puppets at CMJ 2007 in New York, NY in the QRO Concert Photo Gallery

It must be stated first off that the Meat Puppets do not play ‘new country’ [shudder], but their sound also doesn’t reach back further into the past like many of today’s young artists, into the authentic twang & holler of the vanishing backwoods (save for Lollipop‘s final track, “The Spider and the Spaceship”, a ditty where you can’t tell if the backwoods is mock- or not-).  Instead, the Meat Puppets are grounded in what Middle America has actually been for decades, of flat, endless, and aging suburbs with flat, endless, and aging stores and parking lots, connected by flat, endless, and aging highways and byways.  It all gives Lollipop a realistic feel, even if that realism isn’t that exciting, without the highs & lows of urban or rural life, but just going on and on.

There are notes of color in Lollipop, such as “Spider”, the reggae/ska-ish shanty “Shave It”, dark-psych elements of “Hour of the Idiot”, and ‘get out of town’ road-press to “Vile”.  But other tracks are just decent & forgettable, not reaching the harmony & rock quality of “Damn Thing”, and a few, such as the folk harmonies to “Amazing”, really do just go on too long.  It’s all a bit like one of those independent ‘slice of life’ films that definitely captures an ordinary day in an ordinary life – but also leaves you wanting a bit more Hollywood’s unrealistic drama.