Morel : The Death Of The Paperboy

<img src="https://www.qromag.com/wp-content/uploads/2008/11/morelthedeathofpaperboy.jpg" alt=" " />The many talented, many act Richard Morel combines rock and electronica on his third solo release, <em>The Death Of The Paperboy</em>.<br />... 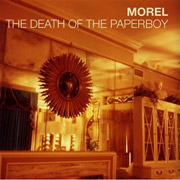 The ubiquitous producer/remixer/musician/and more Richard Morel nicely combines his tradecrafts on his latest Morel release, The Death Of The Paperboy.  The D.C.-based artist has been a co-working force on a varied array of projects, from DJ-ing with the legendary alt-punk icon Bob Mould (QRO live review) together as Blowoff to co-writing and producing with the one-and-only Cyndi Lauper on her new record, Bring Ya Back to the Brink.  He’s also taken more of center stage with his house music duo Deep Dish (no connection to the SNL skit…) and remixing under the name ‘Pink Noise’, while playing keyboards & vocals support in Mould’s touring band.  But after all those other names, Morel has returned to his own, with his third truly ‘solo’ release, The Death Of The Paperboy.

Akin to Bob Mould’s more recent recorded work, Morel marries alt-rock to electronica, but whereas Mould suffered when he relied too heavily on the ‘tronic side of things, and wisely returned to focusing on his vocals and guitar (most recently with District Line – QRO review), Morel much more successfully utilizes electronic instrumentation and effects on The Death Of The Paperboy.  He also brings interesting and compelling vocals to the release, something one might not have expected from such a ‘behind the scenes’ player.

While opener “A Boy’s Revenge” is a fairly standard ambient intro, the following “Flawed” is anything but; the grand rocker brings an effective press (reminiscent of today’s Mould, but with more effects).  And Morel explores different rock-tronic avenues early on in Paperboy, with the titular track wistful and echoed, while “Still Born” succeeds thanks to its strong backbeat.  Though “No Makes Me Lonely”, the weakest piece on the record, is a little run-of-the-mill, that’s forgiven with the slow reverb expanse of “Anymore, Anymore” (the most Mould-like number on Paperboy), which just gets more and more memorable.

After its strong a-side, The Death Of The Paperboy’s second half is somewhat of a slide, but still pleasing.  The stripped piano + vox of “The Start is The End” and more relaxed ‘tronica of “My Side” are both simple, but good.  The grander “Falling Off The Verge” is a little too ‘rock grand’, and there’s a cheesy-sleazy nature to the penultimate “I’m So Low I Keep On Falling” – yet that piece also works.  Moreover, Paperboy’s end is perhaps the record’s strongest number in the eye-opening “Nova”; with higher effects and a prominently affected voice, not to mention a strong and remarkable rhythm, Morel provides an interesting and reverberating finish to his release.

But he isn’t done yet, as The Death Of The Paperboy also includes a second CD, ‘Disc-0’ to its preceding ‘Disc-1’, of Pink Noise mixes and a few other pieces as well.  Remixes are always a bit tricky, especially when accompanying their originals.  ‘Disc-0’ starts off relatively standard with new versions of “Falling” and “Reverie”, and the reworked “My Side” is a lame rap-beat-monotone.  But then the second disc gets better and better later on with the echoes and beats carrying in remixes of “Anymore, Anymore”, “Nova”, and “Flawed” (the best ‘regular’ tracks unsurprisingly provide the best remixes).

After playing sideman or remixer on so many pieces under so many other names, it’s nice to see Richard Morel put something under his own again.  But, more importantly, it’s something worthy of his name in The Death Of The Paperboy.