Neil Young is as much of a paradox as anyone in the history of popular music.... 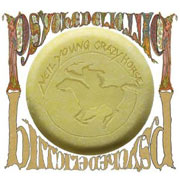 Neil Young is as much of a paradox as anyone in the history of popular music.  Perceived as a folkie by most, he was all of that during his prime, while also being one of the heaviest artists of his generation.  The role of Crazy Horse in his career arc only adds to the paradox.  Much of Neil Young’s most vital output has come from his collaborations with Crazy Horse, but nowhere else has he treaded more water.  Stubbornly and notoriously restless, Neil Young’s sound has gone through many transformations during his career, but the basic sound of his work with Crazy Horse hasn’t changed in the 43 years between Everybody Knows This Is Nowhere and their newest release Psychedelic Pill.

Nine years has elapsed since their last collaboration Greendale, the longest gap between Neil Young & Crazy Horse albums yet.  They make up for it in a big way in 2012.  In June they released the appropriately named Americana (QRO review),an album that consists mostly of traditional American folk songs.  An record of covers provided more structure than Neil Young & Crazy Horse usually operate with, but they still managed to jam and stretch out a full-length of little folk ditties to an average song length of over five minutes.  Apparently this wasn’t enough for them, because much of Psychedelic Pill started from jam sessions during the recording of Americana, and it shows.  At a length of nine songs, it still manages to stretch out over two discs with three epics clocking in at over 16 minutes each, including the almost 28 minute long opener “Driftin’ Back”.  However, they tighten up in between.  Most of the remaining pieces are less than four minutes long.  As such, there are two distinct sides to Psychedelic Pill.

Drawn-out, wall-of-sound jamming may be a strong point of Neil Young & Crazy Horse, but there isn’t much in these jams that we haven’t heard before, and at times they seem to be long for the sake of being long.  When Neil Young starts chanting about getting a “hip-hop haircut” 26 minutes into “Driftin’ Back”, you have to wonder if it’s just to see if you are still paying attention.  The next song, the concise title track “Psychedelic Pill”, starts off with a solid, punchy riff and pounding drums.  Unfortunately, it features a very prominent and very annoying phaser effect throughout, especially during the verses.  Fortunately they get jamming right next on “Ramada Inn” and close the first disc by getting succinctness right with “Born in Ontario”, an ode to Neil’s homeland.  The second disc offers no surprises, offering up more of the Crazy Horse sound in both short and long format.  It closes with a much-needed de-phasered mix of “Psychedelic Pill”, showing just how much the song can rock if it doesn’t sound as if it were recorded from a passing submarine.

In Psychedelic Pill, we get both sides of Neil Young & Crazy Horse, and we get the best and worst of each.  As such, it’s still a decent record, and with some editing it could be a pretty good record.  Just by removing the awful phasered version of “Psychedelic Pill” and trimming “Driftin’ Back” to 20 minutes, it would be considerably better, not to mention shorter than Greendale and able to fit on one disc.  That being said, anyone who has worked with, or even listened to Neil Young can tell you that Neil is going to do what Neil is going to do, for better or worse.  Luckily, even at the age of 66, his newest album pays off more often than not.