Noah & The Whale : The First Days of Spring 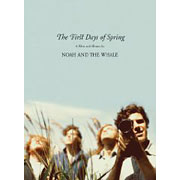 When listening to music, one often tries to identify with the emotions, the experiences, the thoughts of the artist; the listener is compelled to do this with Noah and the Whale’s second LP: The First Days of Spring. Charlie Fink’s harrowing vocals coupled with the potent, melancholic, folk sound of the rest of the band capture the intimacy and raw emotion few artists can truthfully portray through their music.

Don’t expect the same empty, hand-clapping, summery sound of their debut album (QRO review); although only a year separates the release of their two LPs, there’s undoubtedly a marked difference in their approach to this new record. In fact, there’s a delicacy and a beauty to their new material that was only hinted at in earlier tracks “Give a Little Love” and “Hold my Hand”.  Fink, the banal narrator of their debut, is no longer the boy crying out in anguish: “If love is a game/How come I’ve never won?” Instead, although what he’s saying is still somewhat clichéd, his passionate and emotive vocals create an intimacy to his lyrics of desperation, hollowness and anguish; after all, this is essentially his lament and reflection on love and loss after breaking up with former Whale vocalist Laura Marling. This is never more powerful than in the sincerity of “My Broken Heart”: “thought I believed in love but I’ve never seen it through/I didn’t marry the girl I loved”.  Fink’s right in his declaration that “things are getting heavy”; this record displays a side and a potential of the band many critics would not have believed existed 12 months ago.

Without doubt, the entire band are better musicians this time around; from the layered acoustic, piano and orchestral harmonies of the colossal six-minute opening track, to the subtle strings and clean, ringing guitars of the slow, three song finale, their sound takes on epic proportions whilst at the same time seeming to be minimal.  It’s certainly a more mature sound; a sound that’s not hollow like that of their first LP.  There is something cinematic to the whole album too; it was after all produced with the intention of providing the soundtrack to a short film of the same name.  Due to this, Noah and the Whale have effectively welded both film and music into one with this record; its meaning is now not just lost over laptop speakers.

The title of the album is actually quite fitting for the band; they seem to have been born again over the last year, becoming at the same time a more refined group of musicians. So, regardless of what you think of the first album, on the back of this, their second attempt, they’re definitely something worth checking out. It’s by no means an exaggeration to say that this is one of the greatest, most poignant and beautiful albums of the year so far.