Vocals or no vocals? For post-rock bands, that is the question.... 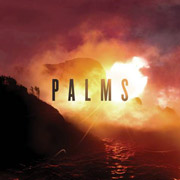 Vocals or no vocals?  For post-rock bands, that is the question.  Whether to take the high road of instrumental purity like Explosions In the Sky (QRO live review) or Mogwai (QRO live review), but run the risk of losing most listeners who are used to some singing, or get a singer for the vocal hook, but possibly come off as watered-down.  While after California’s post-metal break-up, their core reformed as Palms and embraced vocals – thanks to getting a strong singer in Chino Moreno of Deftones (QRO live review).

Like most good post-rock, debut Palms soars in tragedy, but also distance, whether in atmospherics (“Tropics”, “Antarctic Handshake”) or loss (“Patagonia”).  Meanwhile, Moreno adds to the instrumentation by following it, not forcing it.  Just as the singer can verge on emo in Deftones, so can he in Palms, like with the slightly overwrought “Mission Sunset”, but usually he sticks to the instrumental script.

Yes, Palms is only six tracks, but the songs average at almost eight minutes a pop.  And it effectively does its post-rock work – this time, with vocals.