The shoegaze gods have spoken!... 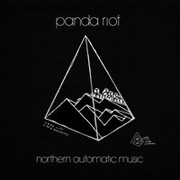 The shoegaze gods have spoken!  With the long-awaited release of new material from My Bloody Valentine, the stars seem to have aligned for a modest renascence of the genre.  If those dreamy old winds start blowing, you hope that it catches the new sails of acts like Panda Riot, who’ve kept the lamp light burning through the good times and bad.  Mainstays of the Chicago scene for years (by way of Philadelphia before that), the four-piece has the benefit of fiddling with (and sometimes fighting against) every sort of PA and tin-can-on-a-string sound system you can shake a stick at.  On their new record Northern Automatic Music you can hear that experience pay dividends with songs that know themselves well enough to find that sweet spot, hunker down in lush aural patterns, and let the good vibrations roll.

Like most alleged rebirths, the second coming of shoegaze is a bit overstated.  Panda Riot’s choral layering, buzz-saw guitars, and lyrical dada pathos fit the bill, but there’s an overarching precision that the foursome achieve on record which you never get with the more rough around the edges shoegaze.  That’s just as well.  Tracks like “Someday, Someone Will Wake You From This Nighttime” hit the listener with the sort of squared-off, planed accuracy of multi-tracked orchestral electronic music.  Not such an easy sound to pull off with the traditional rock lexicon while holding onto the warmth of the rock delivery (compare to the cold, technical precision of high metal).  Worth doing if you’re able.

Execution and precision aside, the big ‘game changer’ on this album was the foregrounding of Rebecca Scott’s vocals.  Panda Riot’s previous effort, the respectable Far and Near EP, felt like an exercise in vocal evasion.  Scott’s breathy voice was often buried beneath layers of breathy backing tracks, smothered with banshee guitars, and run through compressors until the vocals were properly worn down from low- to no-relief.  The general message seemed to be: “Hey, we’re a guitar band first.”  Fair enough.  But in the business of pop music people like a sweet phrase from a sweet voice an awful lot.  Even bad voices are preferred to none.  Happily Panda Riot decided to give the people what they wanted (Northern Automatic Music For the People), pumped up the vocal tracks, and cobbled together some catchy sing-along lyrical moments (see the mid-song breakdown in “Black Pyramids”).

Overall, an impressive sun-drenched, moonlit debut LP that combines a uniformity of purpose with all the bells & whistles.  Vinyl lovers will despair that St. Marie Records appears to be only offering the album in digital and CD format, but copies of the 7” single “Serious Radical Girls” (QRO review) are still floating around the indie rock nether-verse.  Grab ‘em while you can and quaff some neo-gayze delight in good health.