Paul Weller has always been about the big thoughts.... 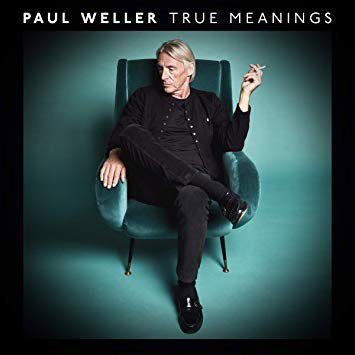 Paul Weller has always been about the big thoughts, but sometimes, these have been too garbled behind the early rock of his first fame in The Jam or the later electric-pop themed solo releases.

On True Meanings, Weller finally seems to find the right combination straight from the get-go in “The Soul Searchers” which is rocking, but also gentle.

This release may not be for everybody, but “soul searching” is a good way to describe it, and his acoustic guitar works well over his more oft favored electric of the past. “Aspects” is gold in this eclectic atmospheric sense, if a little too low key even, and at times, such as on “White Horses” he even sounds somewhat muddled by dragging violin or guitar notes.

Click here for photos of Paul Weller at Wonder Ballroom in Portland, OR on October 1st, 2015 in the QRO Concert Photo Gallery

Click here for photos of Paul Weller at 2014 Riot Fest in Chicago, IL in the QRO Concert Photo Gallery

Click here for photos of Paul Weller at Royal Hospital Kilmainham in Dublin, Ireland on June 24th, 2014 in the QRO Concert Photo Gallery

Click here for photos of Paul Weller at Royale in Boston, MA on July 28th, 2013 in the QRO Concert Photo Gallery

Click here for photos of Paul Weller at Best Buy Theatre in New York, NY on May 18th, 2012 in the QRO Concert Photo Gallery

Overall though, this is high caliber work. “Gravity” is really just solid emotional acoustics, “Movin On” is acceptably folky, and “What Would He Say?” is maybe religious, but again, damn solid. The horns are worthy of tears even.

Something in “Old Castles” sounds blatantly like Echo and the Bunnymen, and that is just fine, especially when “Books” is so soulful and original, “What is this for?” being the prerogatory line. “Mayfly” may be the secondary high point to “Aspects” as there is a joyous cool to it, “In the midnight can you hear me?…” it opens.

“Bowie” is however, somewhat drab, even as a tribute to the late music star. “Wishing Well” is reasonable acoustic pop as well. Probably the best track towards the latter half, or best period is “May Love Travel With You”, which is as eerie as all the others, but somehow more energetic or inspired even than some of the faster songs in the guitar.

Paul Weller, at this juncture in his career, might be moving inward rather than extending his appeal, as even Saturn’s Patterns (QRO review) did extend it relatively well; definitely his early solo pieces and The Jam albums did. However, True Meanings is a true version of spirituality and emotion. It might not be the happiest or the broadest, but it is emotional and embracing.