R. Garcia : I Used To Write On Walls & Other New York City Stories

<img src="https://www.qromag.com/wp-content/uploads/2009/11/rgarciaiusedtowriteonwalls.jpg" alt=" " />The prolific Randy Garcia lets his instruments do the talking as 'R. Garcia'. ... 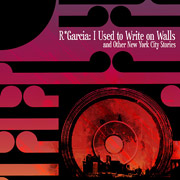 Randy Garcia (QRO interview), founder of Atlanta’s NoPhi Records (and Nophest – QRO recap) & The Nerd Parade has always worked a bit ‘behind the scenes’, whether running a label & festival (the latter of which actually didn’t feature any artists from the former), to employing female vocals to lead Nerd Parade.  But as ‘R. Garcia’, he steps a bit more into the spotlight, albeit letting his instruments do the talking on the nearly all instrumental I Used To Write On Walls & Other New York City Stories.

But the heart of I Used To Write On Walls is the un-beating one of the undead, in "Vampire Girl".  A recording from an old vampire movie starts the piece off, but the epic instrumental practically tells a story all on its own, without words.  Like any near-completely instrumental piece, one does at times wish for some sort of vocals, but that lack of just makes the whole thing more haunting.