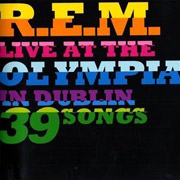 As incredible as it may seem now, it was only a few years ago that R.E.M. seemed destined for passing.  The iconic alternative band may not have been declining since they signed to major label Warner Bros. in 1988, but really had been since 1992’s Automatic For the People, or at least since the 1997 departure of drummer Bill Berry.  Records like 1998’s Up, 2001’s Reveal, and 2004’s Around the Sun were justifiably ignored by many long-time fans, with only a few choice tracks on any of the albums, and certainly weren’t bringing in new fans, despite the post-Strokes rebirth of interest in modern rock.  They’d even failed to get John Kerry elected President in 2004 with their ‘Rock For Change Tour’.

The 2007 release of their first-ever live album, R.E.M. Live, may have seemed desperate, but it seemed to re-kick-start the band.  That year, they returned to Dublin (site of R.E.M. Live in 2005) to play five nights at the Olympia Theatre, where they test-drove new material live in front of a crowd for the first time, as well as hitting up old tracks.  It was the start of the revival/rebirth/whatever you want to call it of R.E.M., which culminated last year in Accelerate (QRO review), their best record since Berry’s departure – since Automatic.  And now those live sessions are out in R.E.M.’s second-ever live album, the two-CD, 39-track Live at The Olympia.

Olympia features live versions of nine of the pieces from Accelerate (only “Hollow Man” and “Sing For the Submarine” are left out – neither one Accelerate‘s finest), including “Supernatural Superserious” back when it was named “Disguised”.  “Accelerate” is naturally improved live, it’s energy kicking off the record & the (re)new(ed) R.E.M. even better than it did on the studio album, but also improved is Accelerate‘s worst, “I’m Gonna DJ”.  The one real miss on Accelerate, live, much of the unnecessary studio gimmickry of “DJ” is removed, and singer Michael Stipe’s energy no longer feels like an old man trying to act young.  It’s not the best piece on Olympia, but it’s also not the standout worst.

But you’re not interested in Olympia for live versions of the new songs.  There are two new songs that never made it onto Accelerate, “On the Fly” and “Staring Down the Barrel of the Middle Distance”, but neither stands out, though “Staring” does tap into some of that Accelerate live momentum.  Instead, because Olympia was compiled from five different nights, but only one recording of any song was picked for, this meant that Accelerate couldn’t dominate the overall track listing like it likely did in each live show.  Instead, almost three-fourths of Olympia is recordings of older R.E.M. songs, and the band (or whoever picked the recordings) seemed to have listened to the critics & the fans, leaning heavily into the pre-Warner Bros. era.  The two records most heavily featured are 1985’s Fables of the Reconstruction and 1984’s Reckoning (QRO deluxe edition re-release review) – only two songs fewer from Reckoning than from Accelerate, in fact.

In the R.E.M. discography, Reckoning always stood a bit in the shadow of the preceding debut full-length Murmur (QRO deluxe edition re-release review), but it gets a great chance to really shine on Olympia – not just classics like “so. Central Rain” or “Pretty Persuasion”, but also an excellent “second Guessing” [note: QRO sticks to the original, funky-capitalization spelling of the tracks from Reckoning…], not to mention live staple “little america”, where Stipe replaces ‘Jefferson’ with ‘Washington’ for, “Washington, I think we’re lost…” (possibly because ‘Jefferson’ had referred to long-time manager Jefferson Holt, who was fired/left after sexual harassment charges in 1997).  But if any classic R.E.M. album has been overshadowed, it has always been Fables, the most underrated album of their years at independent label I.R.S., and it’s great to hear not just single “Driver 8”, but also “Auctioneer (Another Engine)” and “Feeling Gravity’s Pull” – both of which have funny introductions by Stipe as well.

The short shrift to the Warner Bros. era does wisely leave Around the Sun & Reveal with only one song each on Olympia (“The Worst Joke Ever” & “I’ve Been High”, respectively – neither one of those record’s standouts), and Up with none – but also only one from earlier Warner Bros. releases Monster & Automatic For the People (the former’s “Circus Envy” is good-but-not-amazing, kind of like Monster as a whole, but the latter’s “Drive” is a particularly strong rendition), and none from their first two on the label – massive hit record Out of Time (the one with “Losing My Religion”) and major debut Green.  It only makes the I.R.S.-era preference even more heightened – and that’s taken to another level with Chronic Town, their 1982 debut release, as four of the EP’s five songs are included (only one missing is “Stumble”).  But Chronic Town might be one of the best debuts, best EPs ever, so even if any live recorded version of “Gardening At Night” can’t exceed its original studio version, is there a better way to end a performance by R.E.M.?

Stipe, guitarist Peter Buck and bassist Mike Mills do have a few nice banter moments on Olympia, like one saying, “There are no b-sides anymore – it’s all mp3s…”, with which another replies, “There’s no a-sides, either…”, the false start to “Disturbance At the Heron House” (from 1987’s Document), or Stipe’s numerous jokes about how the internet gets the lyrics wrong – but admitting even he doesn’t know what he original sang to some of the older ones (which one lyric site did get right, as Stipe reads from it, “‘Note: these lyrics are approximations.  Stipe himself has no idea what he said…’”).  However, interspersed among thirty-nine tracks, stage banter forms only a slight portion of Olympia, and sometimes it can be hard to make out what is being said (like when Stipe reads & mocks some incorrect internet lyrics).

In the almost three decade-history of R.E.M., 2007 featured some great moments, including the release of their first live record, their induction into the Rock ‘n’ Roll Hall of Fame (which saw Berry come back to play with his band for the ceremony), and their five nights at Olympia Theatre.  2008 may have seen their official ‘return’ in Accelerate, headlining numerous festivals, the election of Barack Obama, appearing on The Colbert Report (QRO Indie on Late Night TV), the greatest ‘return-to-form of a massive band who never broke up’ since U2’s All That You Can’t Leave Behind in 2001 (and R.E.M. look far less likely to follow up with diminishing returns, like U2 have since then – QRO album review).  But 2007 is where it started, and Live at The Olympia gives fans a massive set, focused mostly on Accelerate and the early years – i.e., your dream R.E.M. show.