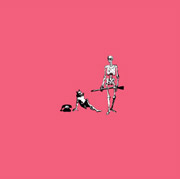 In the few previous years, much has changed for Eric Elbogen (Say Hi).  He moved from Brooklyn to Seattle in 2006, and then shortened his band’s name from Say Hi To Your Mom in 2007.  Before moving to Seattle, he released Impeccable Blahs, a collection of songs about vampires, after releasing three records all about robots.  But his biggest shift was to come (no, not turning thirty…): 2007’s The Wishes and The Glitch (QRO review) ditched the “jokey” subject matter (his own words – QRO interview) for lyrics as emotional as his instrumentation.  Ooh & Aahs keeps this up, and, more importantly, keeps up his sound, a low-key, fuzzy expanse that borders on indietronica while maintaining a sad sustain.

There is a pseudo-constant running through many of the song titles, at least, on Oohs – half of them have girls’ names in them, and much of the record is devoted to Elbogen’s ‘sad geek’.  Openers “Eloise” & “Hallie and Henry” put it above a strong bass line and beneath a sadder wash chorus, while “Oh Oh Oh Oh Oh Oh Oh Oh” marries it to a catchy rhythm.  The melancholy carry of “November Was White, December Was Grey” is trademark Say Hi, while the horns on “Maurine” make its sadness somewhat brightening.

Click here for photos of Say Hi at Bowery Ballroom in New York, NY on March 2nd, 2008 in the QRO Concert Photo Gallery

Click here for QRO’s review of then-Say Hi To Your Mom’s first show back in Brooklyn since moving, at Union Hall on March 29th 4th, 2007

Those tracks are almost all from Oohs’s first half; the Aahs side is where Elbogen stretches, and while interesting, it does get away from what he does best.  The kind of ‘road-pop’ synth of “One, Two … One” works, but then Aahs ends on its three weakest tracks.  “Audrey” ends abruptly and is just as unmemorable, while the keys are a little much on “The Stars Just Blink For Us”.  Closer “Sallie’s Heart Is Stone” is a bigger, dark-sad epic that shows growth, but isn’t what you come to Say Hi for.

After all the change in 2006 & 2007, Elbogen has only done a little shifting since then, most notably leaving longtime solo-release strategy through distributor Rebel (after having his digital release, ‘pay if you want to’ strategy for Wishes see its thunder stolen by Radiohead announcing that they were going to do that with In Rainbows – – four days before Elbogen actually released Wishes online) for more ‘traditional’ indie imprint, Barsuk (Ra Ra Riot, Nada Surf, Menomena – previously Death Cab For Cutie & Rilo Kiley, before they jumped to major labels).  But him staying true to the ‘new’ Say Hi is the best kind of change.

I Monster : A Dense Swarm of Ancient Stars