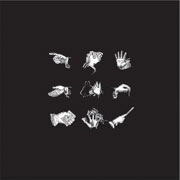 Once upon a time, Eric Elbogen (QRO interview) could have been stuck in a musical ghetto.  The once-Brooklyn, once-known as Say Hi To Your Mom delivered three fuzzy, indietronic albums about robots, and then one about vampires.  But after that, Elbogen moved to Seattle, turned thirty, and generally ‘grew up’, dropping the ‘To Your Mom’ and proceeded to write songs about girls & stuff like that with 2008’s The Wishes and The Glitch (QRO review – also his first record that wasn’t ten tracks).  However, while the name & lyrics changed, the music style didn’t, maybe going a little more lo-fi, a little less indietronic, but still the Elbogen you knew.  With Um, Uh Oh, Elbogen finally changes his sound as well, introducing alt-country and even blues to his music, and while not as rewarding as previous efforts, it’s a definite evolution.

Um, Uh Oh opener “Dots On Maps” lets you know this is a new Say Hi.  Whereas a piece named that on a prior Say Hi record would have been indietronic beats and sad, monochrome Elbogen vocals, Um‘s “Dots” is an alt-country trot that’s sad in a slightly gritty way.  But “Dots” and later alt-country-ish track “Handsome Babies” do have a sad, evocative power.  Even more outside the Say Hi zone is when Um draws on the blues, with the dirty-sly “Devils”, procession “Sister Needs a Settle”, and even indietronic-meets-blues “Shiny Diamonds”.  However, while they work after a fashion, they’re not the Elbogen you’re looking for, and can feel a bit by the numbers at times.

Click here for photos of Say Hi at Bowery Ballroom in New York, NY on March 2nd, 2008 in the QRO Concert Photo Gallery

Click here for QRO’s review of then-Say Hi To Your Mom’s first show back in Brooklyn since moving, at Union Hall on March 29th 4th, 2007

For all the change in sound, Elbogen’s vocals don’t change – not even piece-to-piece.  A bit sad-sack in their monotone plead, the singer works around that by letting the instrumentation either lift him (& you) up with ‘dork in love’ pieces such as “Take Ya’ Dancin'”, “Lookin’ Good”, and “Trees Are a Swayin'” (though what’s with droppin’ ya’ ‘g’s, Elbo’?  Who do you think you are, Lissie – QRO interview?…), or down into somber tragedy on “All the Pretty Ones”, “Posture, Etc.”, and closer “Bruises To Prove It”.  It’s really a testament to Elbogen’s musical ability that one doesn’t notice this easily – takes even a record reviewer a while to pick up on it…

You can’t fault Eric Elbogen for growth & growing up, even if it’s not always in the directions you wanted (and you still miss songs about robots & vampires…).  He was indietronic before The Postal Service made it fashionable, even if he’s getting on the alt-country & blues bandwagon a little late in the game (The White Stripes – QRO live review – just finally, officially broke up…).  But hopefully he doesn’t feel he has to ‘live down’ his To You Mom days (does he play any of the old stuff live?), as he goes wherever it is he’s going.