Los Angeles has a keeper in Sea Wolf.... 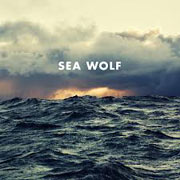 Los Angeles music can get a bad rap.  Most people think of music out of L.A. like they think of everything else out of L.A. – all plastic celebrities with low-speed car chases, and the music either West Side gangsta rap or The Beach Boys.  But the beyond-burgeoning music scene in the trendy Silver Lake area of Los Angeles (a.k.a., Williamsburg West…) has proven more than capable of going toe-to-toe with college towns and Portlandias.  And in Alex Brown Church – a.k.a. Sea Wolf – they’ve got a great alt-folk voice with Old World Romance.

Click here for QRO’s review of Sea Wolf at First Unitarian Church in Philadelphia, PA on May 2nd, 2010

Click here for photos of Sea Wolf at Bowery Ballroom in New York, NY on May 1st, 2010 in the QRO Concert Photo Gallery

It would be easy for Romance to be yet another stripped-down, soul-bearing affair that the world has gotten too much of since Bon Iver (QRO live review) blew up big time.  Instead Church backs up his voice with strong, but not overdone, instrumentation, rhythm, and even effects.  From the expansive “Priscilla” to the walkin’ rhythm of “Dear Fellow Traveller”, Church makes something somewhere between alt-folk, alt-country, and alt-rock, and finds a sweet spot.  It’s maybe best put together in top-to-bottom well-played opener “Old Friend”, though the restrained loss into something carrying closer “Whirlpool” makes a good case for itself as well.

Old World Romance does have the requisite arboreal twee piece (“Blue Stockings”), which is followed by “Saint Catherine St.”, where the brightening effects actually get in the way of the strong verse.  But as Sea Wolf, Alex Brown Church helping put & keep Los Angeles on the top-tier alt-map.