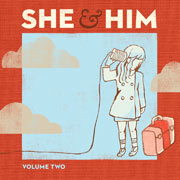 It would be easy for anyone even slightly alt- to hate She & Him.  The ‘She’ is actress Zooey Deschanel ((500) Days of Summer, Yes Man, Elf) – so the outfit already has the ‘actor/actress trying to be a professional musician’ thing going against it.  And the fact that she’s married to Benjamin Gibbard, frontman for indie-powerhouse Death Cab for Cutie (QRO album review), only makes it look like ‘She’ only married into indie.  Plus Deschanel is cute, but in every way, from her twee frame to her twee persona.  Meanwhile, ‘Him’ is alt-folk star M. Ward (QRO album review), who’s worked in/with somewhat big-egoed acts like Bright Eyes (QRO album review) and Monsters of Folk (QRO album review) – and with his fans, they probably feel that ‘She’ overshadows their ‘Him’.  But don’t give into the hate, and you will be rewarded.

Volume 2, the (obviously) second She & Him release, doesn’t have the pseudo-advantage going in of low expectations, which Volume 1 (QRO review) did, as all of the above facts were only more so when there wasn’t a first record to hold up (though she hadn’t married Gibbard at the time of the first release).  But everyone also already has an idea of what She & Him sound like, so if you’re not a fan of older-style alt-country/folk, you know not to tread.  But if you are, you’ll nicely find that She & Him have refined and focused their sound towards the older voices like June Carter-Cash & Patsy Cline, making for a less varied, but also less ‘cute’ record, in the way in which people don’t like ‘cute’.

Click here for photos of She & Him at Governors Island in New York, NY on Fourth of July, 2010 in the QRO Concert Photo Gallery

Click here for photos of She & Him at 2010 All Tomorrow’s Parties in Minehead, U.K. in the QRO Concert Photo Gallery

“Thieves” opens up Volume 2 with some sweet Patsy Cline-esque sad country, and it’s hard not to like anything Patsy Cline-esque (Kate’s affinity for the late fifties/early sixties Nashville artist might be the best thing about the sometimes-maligned Lost character, as it has led to the show featuring such Cline songs as “Leavin’ On Your Mind” & “Walkin’ After Midnight”).  But nothing on the record is quite as pitch-perfect enjoyable as the following single “In the Sun”, thanks to its nice trot.  The greater focus of Volume 2 does mean that there are a number of songs which follow the same trail as “Sun”, but just a little less special, such as the subsequent “Don’t Look Back”, or “Lingering Still”, “Home”, and “Sing”.  Those pieces struggle somewhat to stand out (save for “I could be sweeter” line to “Home” – that line really couldn’t be, though the song could).

Volume 2 is more focused on Deschanel’s voice, likely as she grew more confident after Volume 1, with Ward’s vocals really only popping up in dueling duet Alan G. Anderson cover “Ridin’ In My Car”.  When the record gets away from that focus, such as the more distant pieces like “Me and You” or “Brand New Shoes”, it gets a little away from its strength.  Likewise, when Deschanel’s vocals are more the focus, Volume 2 improves, like on the much-covered old country-girl kiss-off Milton Kellem piece “I’m Gonna Make It Better”, or She & Him’s more girl-group “Over It Over Again”.  Not that Ward’s instrumentation should be dismissed, as it is the essential backbone to Deschanel’s rather flighty voice, as can be seen when missing in the a-cappella closer “If You Can’t Sleep”, the record’s weakest track.

She & Him is really only ‘alt-’ in that Deschanel & Ward are doing something that isn’t done that much these days, going back to some of the oldest & sweetest of country music, which, the short Walk the Line revival aside, is hardly a mainstay on any ends of the dial.  But more honest Americana has been making its way into the indie-stream, so if you can get over the fact that ‘She’ is the lesser Deschanel (though after older sister Emily’s character on Bones turned down co-lead/will they-or-won’t they? David Boreanaz’s character…), you can sit back and enjoy.