<img src="https://www.qromag.com/wp-content/uploads/2012/04/sleighbellsreignofterror.jpg" alt="Sleigh Bells : Reign of Terror" /><br /> Sleigh Bells themselves have transformed - and not, necessarily, for the better.<span> </span> ... 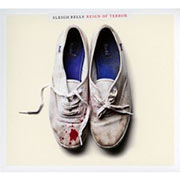 Sometimes acts come along with a sound that is everything you had been missing, whether you knew it or not.  Sleigh Bell’s electrifying combination of hard-core metal riffs (guitarist Derek Edward Miller was previously a member of Florida hard-core legends Poison the Well) and hook-laden pop took us all by storm.  The pummelling relentlessness noise of Treats, their first full length, made the listener feel as though they had a Transformer on their back wherever they go, an explosion of fury and darkness, offset by saccharine vocals.  But now, the band themselves have transformed – and not, necessarily, for the better.

Before the release of Reign of Terror, the band spoke of cohesion, that both flip sides of their sound had been fully integrated.  On first listen this comes through very strongly: the overall feel is one that is much softer than their previous, with songs such as “End of the Line” and “Road to Hell” slipping silkily out of the speakers, “You Lost Me” evoking My Bloody Valentine’s dreamlike soundscapes, albeit with a metal twist.  There are flashes of brilliance, for example on lead single “Comeback Kid”, a perfect blend of dirty riffs and catchy hooks – no wonder it got such heavy rotation on the likes of MTV.

Unfortunately, as a result of this new emphasis on the poppier, less confrontational side of things, Reign of Terror can’t help but have an air of cynical money spinning behind it.  That dark heart, the seething black mass that underlined their earlier work, has all but disappeared.  It feels as though Sleigh Bells are no longer for disenfranchised twenty-somethings reliving their straight edge, hard-core punk youth.  Instead they belong in the sphere of the new emo and metal kids: less like Lightning Bolt, more like Every Time I Die.  The kind of clinical, inoffensive rock that wouldn’t sound out of place on a Michael Bay film soundtrack.  And that is a real shame.