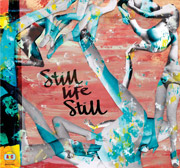 There are many certain things that Canadians do better than Yanks, or really anyone else in particular.  In sports, it’s hockey (and curling…).  In television & movies, it’s how Toronto & Vancouver can stand in for any city, and often do.  In governmental affairs, it’s health care, from cheap prescription pills to their universal health care (founded, oddly enough, by Donald Sutherland’s father/Kiefer Sutherland’s grandfather – yes, Jack Bauer’s for the single-payer system!).  And in indie-rock, it’s an expansive but pressing sound which somehow takes the best of American force & British vistas, and still makes something more than the sum of its parts.  Toronto’s young Still Life Still bring their own fresh take on it with their debut, Girls Come Too.

Not that the five-piece act is some Broken Social Scene (QRO spotlight on) retread – though they are on the same label, Arts & Crafts, and were signed by BSS frontman Kevin Drew (even have their own Brendan, like BSS – QRO interview – and Arts & Crafts’ PR…).  The driving drumming that opens up Girls starter “Danse Cave” is more reminiscent of Atlanta’s Anglophile Snowden (QRO spotlight on), but its rhythm changes more akin to the complicated work of fellow Toronto/A&C denizens The Most Serene Republic (QRO spotlight on).  However, STS bring their own higher alt-rock pressure to bear, and that’s what holds up throughout the record, on “Danse” and such other tracks as the following “Flowers and a Wreath”, plus “Neon Blue”, “Pastel”, “Knives In Cartoons”, and “T-Shirts”.

The group does sometimes show their youth, like on the restrained, pretty tracks “Kid” and “Planets”.  Both came come off a little emo, but amidst everything else on Girls, the two pieces feel like nice changes.  Closers “Scissors Losing Weight” and “Wild Bees” don’t finish off the record quite right, too restrained – and “Wild Bees” has an unnecessary hidden instrumental (why do people still make the hidden tracks where you have to fast-forward to get to the back end?).  Better is the pop-catch added to “Knives” & “T-Shirts” – and “T-Shirts” possesses some funny, straight-faced mock-sexy lyrics, the kind that you’d actually expect to find throughout a record named ‘Girls Come Too’…

Like any young group, Still Life Still could still use some seasoning, but not as much as you might expect, as they’ve been together ever since they first started playing music, and have written – and tossed – a boatload of songs already.  Like the plethora of music festivals north of the border (QRO Festival Guide), or the indie-rock state support program known as ‘The Factor’, Canada just does some musical things better.