Beginning with the slightly obvious, Stone Temple Pilots played a particular role in the ‘90s grunge phenomena, and they did so with a wide array of styles album to... 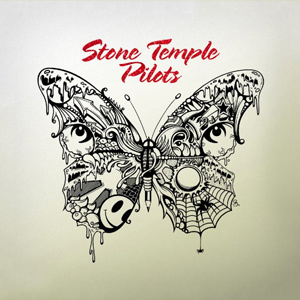 Beginning with the slightly obvious, Stone Temple Pilots played a particular role in the ‘90s grunge phenomena, and they did so with a wide array of styles album to album. Everyone seems to know and love “Wicked Garden”, but do they also love the less well known and softer “Seven Caged Tigers”, or even the popular and softer “Interstate Love Song”. Suffice to say, the passing of lead singer Scott Weiland (QRO solo live review) was the passing of a legend, and a part of Stone Temple Pilots, even as they continue.

Stone Temple Pilots were able to take the weirdness of The Screaming Trees and mix it with the popular sounds of nineties-alt and Pearl Jam or Nirvana. On Stone Temple Pilots, they still do that, but Jeff Gutt is a different singer, and while he sounds like Weiland at times, it shows, even on the opener, the rollicking and aggressively sung “Middle of Nowhere”. That said, Gutt is great on the opener and “You Better Never Get It” is a haunting line.

Occasionally the songs are a bit helter-skelter, and no, this release is not Core, it’s more Purple. “Guilty”, “Never Enough”, and “Roll Me Under” tend to drift a little too close to metal or alternatively pop, which is fine, but not as demanding of your attention. Stone Temple Pilots does demand your attention, as they are brilliant on the familiar guitar slides of the single “Meadow”, and they are equally so when Gutt is allowed to shine. Such is the case on “Meadow” or the more classic Stone Temple Pilots sounding “Just a Little Lie”, but more so with the alternative sounding (think Bowie or Silverchair) “Thought She’d Be Mine”, “Good Shoes”, “The Art of Letting Go”, or “Reds and Blues”.

“Finest Hour” is artsy, airy, pure gold, and while Gutt seems most himself in this song, he croons like a tragic ‘90s alternative singer and not like Weiland. The final track, “Reds and Blues”, shares some of that as it captures that movie ending soundtrack vibe. It is primarily acoustic, and drifts somewhat sadly without jarring. Weiland’s guttural anger and Chester Bennington’s intensity are gone (QRO live review with Bennington), but the sound is as chilling as ever.

Stone Temple Pilots is just like your old favorite singles off any of their releases at times, but everyone should take note as the band allows their personality to shine, with Weiland’s absence, brighter and in some ways better than before. We should all be so lucky to sound as beautiful as Gutt or as rocking as Stone Temple Pilots in 2018.