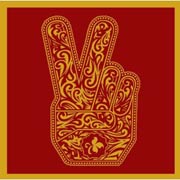 In the early 1990’s when grunge rock was king, Stone Temple Pilots were the Rodney Dangerfield of the genre.  Critics gave them little respect deriding the group as bandwagon jumpers.  STP was accused of sounding like Nirvana, Pearl Jam, Alice in Chains, and [insert other popular acts of the time].  But, as is often the case, the public didn’t care what the critics thought.  And STP grew into a multi-platinum selling, arena packing, powerhouse.

18 years after the release of their debut Core and nine years since their previous album, Shangri-La Dee Da, the foursome from L.A. reunite for their self-titled, sixth album.  And after all these years, the fans remain.  Stone Temple Pilots entered the Billboard chart at number two (behind the Glee soundtrack).  Now even the crankiest critic has to give the members some credit – if only for survival.

But the band does more than merely continue to exist; they rock.  Delivering on expectations, the latest album begins with a one-two punch.  The straight-ahead, radio-ready “Between the Lines” is led by large and layered guitars.  Vocalist Scott Weiland belts, “You always were my favorite drug / Even when we used to take drugs.”  Considering Weiland’s well-documented heroine addiction, the line registers as more than a quaint sentiment.  Next, the band provides “Take a Load Off” – a melodic, yet hard rocking stadium anthem for which STP is best known.

Still, their identity issues remain.  The group throws a curve ball with “Huckleberry Crumble”, which draws heavily on “Rag Doll”-era Aerosmith.  The boogie-woogie continues on “Hickory Dichotomy” with a detour to Led Zeppelin’s “Dancing Days”.  The Beatles get their due by way of Oasis on the psychedelic tinged “Dare If You Dare”.

It’s easy to think the catchy, shoe-gazing pop of “Cinnamon” is another band.  Weiland sings in a higher register and the track resembles nothing else on the album.  Following “Cinnamon”, the heavy, riff rock of “Hazy Days” comes as a shock.  On “Bagman” Aerosmith is once again invoked, this time a-la “Dude Looks Like a Lady”.

Weiland does his lower-voiced David Bowie impression on the mid-tempo “Peacoat,” and his Ziggy Stardust-era Bowie on “First Kiss on Mars”.  “Fast as I Can” rocks like its 1991 (think Guns ‘n’ Roses’ Use Your Illusion).  In typical STP fashion, the country tinged, soft rock ballad “Maver” closes the album on an off-kilter note.

Stone Temple Pilots is the group’s first album recorded without producer Brendan O’Brien at the helm, and it lacks the sonic expansiveness of the band’s best work (Purple).  The DeLeo brothers (guitarist Dean and bassist Robert) assisted by Don Was (Rolling Stones, The Barenaked Ladies, Poison) handle the production duties.  Together, they capture an experienced band that remains vibrant and unafraid to display their multiple musical personalities – critics be damned.