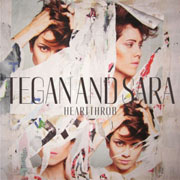 Tegan & Sara have long been filed under ‘alternative’ seemingly mostly because they’re a pair of twin sister Canadian lesbians with outspoken liberal political views, but they’ve also long had serious mainstream appeal – the pair are practically made to be heroes among young girls, from the cool kids table to the geeks’, from tweendom through college years and beyond.  And with Heartthrob, they reach for electro-pop appeal.

Nowhere is this more the case than with single/lead-off piece “Closer”.  2007’s The Con had an amazing single that was way better than the rest of the album in “Back In Your Head”, but 2009’s Sainthood (QRO review) was a more even-keeled affair in terms of track quality.  None of the rest of Heartthrob quite matches the killer electro-pop up-single “Closer”, but the song represents the album, and the rest of the album mostly doesn’t let it down.  Admittedly, there are some numbers that can get a little cheesy (think electro-love “Love They Say” or sweet ‘fool for love’ “I Was a Fool”), and the soul elements of “Now I’m All Messed Up” are a step too far.  But Tegan & Sara put their spin on ‘goodbye & good riddance’ on “Goodbye, Goodbye” like Taylor Swift only wishes she could, and electro-pop torch songs “I’m Not Your Hero” and “Drove Me Wild” definitely work.

In every period of popular music, there have been acts that manage to be both definitely pop but also something different.  Think the John Hughes-era eighties artists like Simple Minds and OMD (video of Andy Samberg not as Ducky interviewing Tegan & Sara).  And now Tegan & Sara step up to the plate.