Tegan & Sara – Love You To Death

The Quin sisters go even further with 'Love You To Death'.... 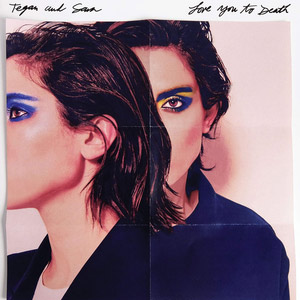 Note that this isn’t just that they go further in the ‘tronic direction. Tegan & Sara were already outspoken on liberal issues, particularly (if understandably) LGBT rights, but speak more on Love. Whereas Hearthrob single “Closer” was a love song for any couples, Love single “Boyfriend” is an anthem for the secret gay side-girls out there, while “BWU” is destined to be played at a lot of lesbian weddings.

That does make those two songs the clear standouts, as the electro-love pop songs can run together like pop songs on an album do (though Love isn’t just the upside of love; there’s also the dance track for the dumped “Dying To Know”, and “100x” is vocals & piano break-up). But Tegan & Sara go even further.