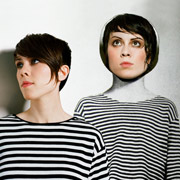 When Tegan & Sara moved to major label status with The Con in 2007, it felt a bit like a con: first single “Back In Your Head” expertly combined their dance beats and pressing emotion, but the rest of the record was nowhere near as well put together.  But with Sainthood, the Canadian identical twin duo finally live up to their promise, while also maturing from teen material into young women.

One thing Tegan & Sara certainly didn’t do with Sainthood was put out the record’s best song as its first single; “Hell” is maybe the least remarkable track on the album, as the addition of more rock to their mix of dance and pressing emotion leaves the single a little run-of-the-mill.  Far superior is the more interesting electronica of the following “On Directing”, or the hook in later track “The Ocean”.  There is also variety on Sainthood, from the scratch/smooth of opener “Arrow” to the compelling rhythm & conversational vocals in closer “Someday”, but always with that pressing emotion.

The certainly young-looking Quin sisters have also grown up a bit, moving from the more teen emotion that characterized their earlier work to expressions of young women – though, like much teen-friendly material, the choruses on Sainthood are almost universally superior to the verses.  It’s not quite a whole record of “Back In Your Head”, and no single song may quite match that piece, but Tegan & Sara have definitely grown into their sound.