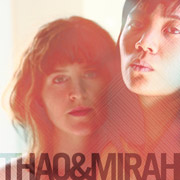 The alt- & freak-folk scenes, which have been blossoming recently, are more open than most music styles/scenes to the singer/songstress.  Two of those who’ve been doing well in the game are Thao Nguyen (QRO interview) – of Thao & The Get Down Stay Down (QRO spotlight on) – and Mirah Yom Tov Zeitlyn – better known as just ‘Mirah’.  Now the two ladies have teamed up as Thao + Mirah, with a selves-titled record.

Thao + Mirah feels like a folk singer/songstress record, in that it is relatively reduced and stripped, despite coming from a combo.  Most tracks just feature vocals, plucking guitar, and some percussion, such as “Eleven”, “Folks”, “Little Cup”, “Teeth”, and “Hallelujah”.  These are nice, but don’t bring anything new to the table – indeed the best of these is probably “Hallelujah”, because its adult-contemporary feel is at least one that you don’t hear much of in alt-folk.  Nguyen & Zeitlyn are best when they actually do venture outside the alt-folk scene, especially in the jazz-style “Rubies and Rocks” and “Likable Man” – the former brings the jazz diva, while the latter goes low-tech for the record’s most convincing piece.

There’s often a limit to what a single singer/songstress can do, and both Thao and Mirah have hit that ceiling in their own musical worlds, so this combo made sense.  What’s more, it was produced by Merrill Garbus, a.k.a. tUnE-yArDs (QRO album review), who’s the biggest new maiden name in the solo alt/freak-folk scene.  Thao + Mirah hits its own ceiling fairly quickly, even as it finds some new avenues that reward.