For a very long time, The Flaming Lips have stood out.... 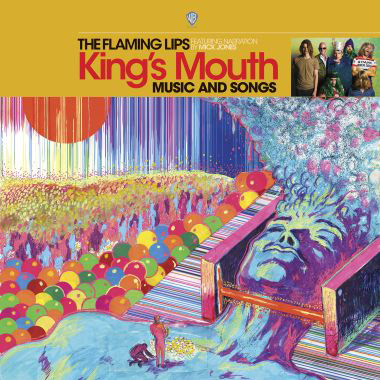 For a very long time, The Flaming Lips have stood out. The kings of the indie-rock spectacular, their shows start with confetti, and only get bigger from there. They’ve done everything from release a four-CD album meant to be played all together at once (1997’s Zaireeka) to crowdsurfing in a plastic bubble with Stephen Colbert (QRO photos). Yet their recorded output has never exceeded or even matched their beloved turn-of-the-millennium seminal releases The Soft Bulletin and Yoshimi Battles the Pink Robots. But now they finally give a spiritual, conceptual album successor, King’s Mouth.

Based around a story idea and art exhibit by frontman Wayne Coyne (QRO interview), King’s Mouth needs to be judged as a whole piece, one entire reign from birth to death. It has The Flaming Lips’ big, airy psychedelics, as well as just enough tech to add and not subtract. There are great spoken parts by Mick Jones of The Clash, and bright uplifting anthems in the heroic “Yoshimi” vein such as “All for the Life of the City” and “Mouth of the King”. It and its songs also aren’t overextended, often a problem for concept albums and psychedelia.

The Flaming Lips live show will always be the first line of the biography, but they’re not all flash and bang, putting together quality work from “She Don’t Use Jelly” to King’s Mouth.