The Postal Service – Give Up (10th Anniversary Edition)

In and of itself, 'Give Up' is ten tracks of pure greatness that is daunting to even think about assigning words to. ... 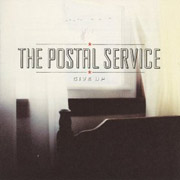 Before there is a mutiny at the rating given to this release, let’s get this out of the way first: The Postal Service’s only album, Give Up, which was released ten years ago already (where does the time go?) was and remains to this day a phenomenal album.  In and of itself, it is ten tracks of pure greatness that is daunting to even think about assigning words to.

That being said, getting right to the point, the tenth anniversary edition of Give Up that was released recently went the exact same route that many albums in this position do, which was to re-release the studio album itself as the first disc (if you still buy CDs) and a second disc of a bunch of stuff that isn’t as good as and doesn’t add anything to the first disc.

The second disc is what we’ll focus on here as it is the only thing that is different about this particular release and thus what makes it the tenth anniversary edition.  It starts off with two new songs.  One of them, “A Tattered Line of String” is simply annoying and not good.  It might be heresy to say it, but Ben Gibbard’s voice has the potential to border on annoying at times and this song is a prime example of that.  The other new track is called “Turn Around” and actually starts off with an extremely promising-sounding hook, but starting at the 33 second mark it shifts into a sub-par tune that should have utilized and emphasized the hook at the beginning more than it did in order to make a truly catchy and endearing song, the likes of which The Postal Service is truly capable of, or, at least were in 2003…

The rest of the disc is made up of mostly semi-cool b-sides, the likes of which were all released from 2003 to 2005 as singles and b-sides of singles, as well as a couple live and cover versions of songs we already know and prefer the original versions of.  Sure, it’s cool to hear Iron & Wine’s (QRO live review) rendition of “Such Great Heights” and The Shins (QRO live review) to a unique take on “We Will Become Silhouettes”, but the point is that we have already heard these songs and does packaging them with this release make it any more special overall?

Looking at the bonus content for what it is, it would have been more desirable for Ben Gibbard and Jimmy Tamborello to actually have just done a second studio album.  People have been asking for it for years and given the methods by which Give Up was originally recorded (through the mail), you would think that it wouldn’t be too difficult to make happen.

It may sound harsh, but all the key players have done with the 10th anniversary edition of Give Up is cheapen what originally was.  Sure, perhaps that is what would have happened with a studio album of all new material, but the point is that it couldn’t have been any more of a letdown that the disc we did get, which was a bunch of remixes we’ve already heard, a couple of covers we’ve already heard, and a couple of new tracks that are just sub-par.  It makes you wonder if this release was really the doing of these two men themselves or a desperate attempt by their record label at selling more copies of Give Up since it did just go platinum recently.  Either way, if you have yet to hear this album, save yourself a few bucks and go buy the original version and forgo the bonus disc of ‘special’ stuff.

The Postal Service – Turn Around