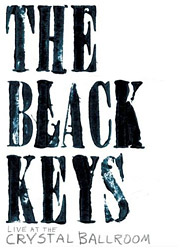 Pound for pound, few bands rock as hard as The Black Keys.  The Akron duo generates a massive amount of force live, which they brought to Portland’s Crystal Ballrom while playing material from their entire catalog.

Click here for photos of The Black Keys at SXSW 2010 in Austin, TX in the QRO Concert Photo Gallery

Click here for photos of The Black Keys at 2009 Voodoo Experience in New Orleans, LA in the QRO Concert Photo Gallery

Click here for photos of The Black Keys at Terminal 5 in New York, NY on February 7th, 2009 in the QRO Concert Photo Gallery

Click here for photos of The Black Keys at McCarren Park Pool in Brooklyn, NY on August 7th, 2008 in the QRO Concert Photo Gallery

The seventeen-track DVD includes a fair amount from their excellent 2008 release, Attack & Release, and plenty more from previous albums. “Psychotic Girl”, “Oceans and Streams”, and the opener “Same Old Thing” from that album shine while their standout track “10 AM Automatic” is as riveting as it ever was.  “Thickfreakness” and “Stack Shot Billy” stick right in the set’s craw, and the band finishes their show with a two-song encore of “All You Ever Wanted” and “Till I Get My Way”.

The DVD features excellent camerawork from several angles – from under Auerbach’s nose to the balcony.   The lighting effects glow, mixing iridescence with flash, and the band infuses the crowd with their powerful sound.  The extras include three music videos, and behind-the-scenes glimpses into the “Your Touch” video and making Attack & Release.

If you can’t see The Black Keys live any time soon, or even if you just did, this is the perfect documentation of their show.  Singer/guitarist Dan Auerbach’s ruthless distortion provides a torrent of energy throughout the show, and drummer Patrick Carney’s all-out drum thrashing is something to behold.  Combined with the high production quality and DVD extras, this is essential to any Black Keys collection.