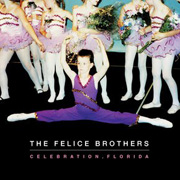 It’s the right time for The Felice Brothers to change up their sound.  The Catskills natives (including both actual brothers and honorary ones) made a successful name for themselves by tapping into the Americana roots-revival on a string of releases, one a year from 2006 to 2009 (plus a tour LP), mastering both the down home stomp and the stripped, old-timey elegy, harkening back to classic artists like Bob Dylan and The Band.  But all that productivity belied something of a lack of evolution in sound – by the time of 2009’s Yonder Is the Clock (QRO review), the release was ‘another Felice Brothers record’, if another good one.

But 2009 also saw the departure of (actual) brother Simon Felice for his own The Duke & The King, and while the outfit still retained Felices Ian and James (QRO interview), along with bassist Christmas Clapton, washboardist/violinist Greg Farley, and drummer Dave Turbeville, it was time for a break and a shift.  So 2010 saw no new Felice release, and this year’s Celebration, Florida eschews the romp for the sad, but also the ominous, and even introduces a tech element to the decidedly backwoods act.  While it’s not as good as the greatest Felice, and the upbeat air is certainly missed, Celebration is a skilled change in a band that needed one.

That all being said, Felice fans (a notoriously tiresome bunch, older suburban types attempting to ape the countryside) probably will be disappointed that there’s no revival-stomp along the lines of traditional live favorite "I’m Saved" (QRO video); instead, the possibly ironically-titled Celebration (they’re not from Florida, either…) is slow & sad from start to finish, opener "Fire At the Pageant" to closer "River Jordan", mostly in empty dancehalls (such as "Fire" and "Back In the Dancehalls") or intimate tragedy (like "Jordan" and the Dylan-esque "Best I Ever Had").  Still, it’s a sound that the band has down pat, maybe best done in the piano ode/elegy "Oliver Stone", about the classic director in classic Felice fashion.

The brothers Felice didn’t just take away, however, but also added on Celebration.  Bringing in a tech-stop is something of a hot new thing these days (see Sufjan Stevens’ The Age of Adz – QRO review), but The Felice Brothers don’t overplay their hand or mess up their style, as the sounds are used largely for rhythm and percussion (aside from a few recorded interstitials).  Indeed, the new sonics are used mostly to create an ominous air throughout the record, one that really helps differentiate this record from prior releases – "Honda Civic", for instance, feels like a subtle warning about the death of the dancehalls that previous Felice albums partied in.

The new styles mean that pieces struggle to stand out from each other on Celebration, but the record itself stands out from its predecessors – both cases far different from what the band has put out before.  Certainly not a perfect shift – the upbeat Felice definitely needs to return – but a skilled one by a skilled band that needed a change.