The Get Up Kids : There Are Rules

<img src="https://www.qromag.com/wp-content/uploads/2011/02/thegetupkidstherearerules.jpg" alt="The Get Up Kids : There Are Rules" />Emo inspirers (whether they like it or not) are at their most indie (whether you like it or... 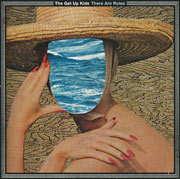 Pretty much ever since Kansas City’s The Get Up Kids put out sophomore record Something To Write Home About in 1999, they’ve been called an important, influential emo band – and have been running away from that title.  2002 follow-up On a Wire shifted away from that Something sound name-checked by the likes of Blink-182 (QRO photos), with band members going on to say that a lot of the bands who’ve claimed them as their influence "aren’t very good," and even apologized if they started today’s emo scene.  The Get Up Kids as a whole broke up in 2005 for various other projects, including bassist Rob Pope joining a little-known indie outfit called Spoon (QRO live review).  They got back together three years later to tour the tenth anniversary of Something, prompting people to think that the new material they were also working on might be a return to their emo ‘roots’.  Well, These Are Rules is The Get Up Kids at their most indie yet.

The instrumentation is turned up, shifting away what-could-be emo vocals from singer/guitarist Matt Pryor (The New Amsterdams), the songs usually either darker or with more synth from keyboardist James Dewees (Reggie & The Full Effect).  Rules never really gets amazing, but it never really falters, either, save for perhaps the pseudo-industrial touches to "The Widow Paris".  Meanwhile, penultimate "When It Dies" is the closest to indie-awesome on the record, thanks to an expanse that is something that the band could use more of.  There are emo-ish hints, like in the sharper "Regent’s Court" or darker "Keith Case", but they’re hardly dominant, and if it weren’t for The Get Up Kids’ history, you wouldn’t think twice about it.  The real push-pull isn’t between indie & emo, but between rock pressure of such pieces as opener "Tithe" and electro-pressure to numbers like "Birmingham", with the band occasionally squaring & exceeding the circle, such as on closer "Rememorable".

If you were looking for the emo follow-up to the tenth anniversary of Something To Write Home About, you’ll probably be disappointed.  If you’re looking for breakthrough alt-rock of Spoon, you’ll be off the mark.  If you’re looking for a companion counterpoint to !!!’s (QRO live review) "There’s No Fucking Rules, Dude", you won’t fucking find it, dude.  But if you’re just looking for indie rock, The Get Up Kids have made it there.