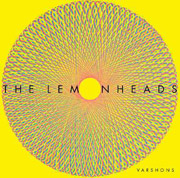 Is there anyone who isn’t going alt-country these days?  So many established alternative singer/songwriters are dipping into Middle America, it can be hard to keep track.  Now here comes another one in The Lemonheads’ Evan Dando.  Dando rocketed to fame in the early nineties with It’s a Shame About Ray and his cover of Simon & Garfunkel’s “Mrs. Robinson”, before being felled by the late nineties decline in interest in alternative music, plus his own battle with heroin.  He retired ‘The Lemonheads’ moniker for almost ten years, before reviving it for 2005’s The Lemonheads, and has been on something of an upswing since then, including re-releasing It’s a Shame About Ray (Collector’s Edition) and even touring the old record (QRO live review).  And now he goes even older, with a mixed bag of almost exclusively alt-country covers, Varshons.

That Varshons is a mixed bag actually makes sense, as it was inspired by the mix-tapes Butthole Surfers frontman Gibby Haynes has made for him over the years.  What is a surprise is that, with one exception, everything on Varshons is alt-country, whether the original was country, like opener “I Just Can’t Take It Anymore” by Gram Parsons, or not, like the following “Fragile” by early art-punkers Wire (QRO live review).  But even there, the alt-country varies in quality, from those two decent pieces to the outstanding two that follow, G.G. Allin’s “Layin’ Up With Linda” & Townes Van Zandt’s “Waiting Around To Die”.  The G.G. Allin cover exploits the anti-hero, outlaw country vein very well, with surprisingly deep biker vocals from Dando, while the rendition of Zandt goes the other way, philosophical, but both have straight-faced, monotone deliveries that give them more heft.

From there, Varshons largely slips a bit, thanks partly to some over-distort and over-guitar on tracks like Randy Alvey & The Green Fuzz’s “Green Fuzz” and July’s “Dandelion Seeds”, though Fuckemos’ “New Mexico” does go for it with the guitar-rock.  But there are also some more stripped tracks, including the over-important alt-folk Sam Gopal cover “Yesterlove” and the nice-as-a-country-duet “Hey, That’s No Way To Say Goodbye” by Leonard Cohen, but also Linda Perry’s “Beautiful”, whose real ‘beauty’ and strength finishes out Varshons well.

There is one exception to the alt-country rule on Varshons; unfortunately, it’s not a good one.  For some reason, Dando decided to dip into dance-tech on his cover of Arling & Cameron’s “Dirty Robot” – the beats are simple and annoying, and in this over-saturated dancetronic world (maybe the only style of music as suddenly prevalent as alt-country), utterly unimpressive.  The only thing really notable about “Robot” is that supermodel/famed coke addict/poster child for anorexia Kate Moss does the vocals; she doesn’t sing badly, which is about all you can expect.  Dando also got actress/famed daughter of a rock star Liv Tyler to duet with him on “Goodbye”, and she holds up fairly well, but not amazingly.

The new appreciation and connection Blue Staters have had for the Red States in this decade, whether from actual affection for soldiers & the like, or just political calculation, has seen alternative music tap into the folk & country sounds of the heartland like never before.  So why shouldn’t Evan Dando?  And adopting others’ work gives him a base to start with (though don’t feel ashamed if you haven’t heard of most of the artists covered…).  A mixed bag of an alt-country mix-tape, for sure, but something interesting.