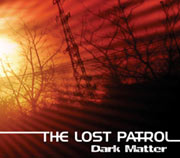 What has emo taken from us?  There was a post-punk time when emotion could be the basis of song and it would not be mocked, but rewarded.  However, in these ultra-ironic days, emotionalism can come off as pleading, grandeur as over-the-top.  It can make something that trends as out of the bend as The Lost Patrol, with their echoing female vocals, twelve-string acoustic guitars and Moogs, seem overdone, when it’s actually interesting, as on their latest, Dark Matter.

That being said, Dark Matter does start off on a too-pleading note with opener “Calling Your Own Name”, as The Lost Patrol do need something more to anchor & flavor their rather new wave echo effects.  The best employed is a sort of alt-country, though a very alt country, like the twang behind “Nobody There”, plugged-in nature to “These Days”, and especially the sweet, smiling “Before I Go”, which is kind of a marriage of Camera Obscura (QRO live review) and Blondie (QRO photos).  Also working fairly well beneath The Lost Patrol’s reverberating sound is a kind of indie-road, such as the bass to back-to-back “In Your Blood” and “Leading the Blind” (though the former is superior to the latter, and they would have been better served not coming one after the other), or the jangle-haunt guitars of penultimate “Early Morning”.

Before & after “Early Morning”, Dark Matter is little more with the times, a little less inventive, as the preceding “Ever After” goes for more of a waft, and closer “Play Me For a Fool” employs strings, both sounds that were once out there, but are now hot new indie-sounds (look at the heaps of praise laid upon the wafting Deerhunter – QRO live review – or orchestral Dirty Projectors – QRO album review).  And maybe The Lost Patrol central marriage of eighties-style female echo with fifties-style rock rhythms will be the next ‘next big thing’.