The Physics of Meaning : Snake Charmer and Destiny at the Stroke of Midnight

<img src="https://www.qromag.com/wp-content/uploads/2008/12/thephysicsofmeaningsnake.jpg" alt=" " />Daniel Hart of St. Vincent & Polyphonic Spree returns to his original project, The Physics of Meaning, with <em>Snake Charmer and Destiny at the Stroke... 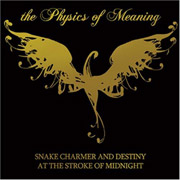 While today Daniel Hart is best known for his work with Dallas, Texas’ Polyphonic Spree (QRO album review) and especially as the violinist for St. Vincent (QRO spotlight), back before that he was the leader of his own band, The Physics of Meaning.  Now the Chapel Hill, North Carolina native returns to his roots with his second Physics record, Snake Charmer and Destiny at the Stroke of Midnight.  He’s wisely upped what he does best – violins – from 2005’s self-titled Physics debut, but that’s unfortunately left what he does worst – vocals – also more prominent.

The high spot that violins – and strings in general – play on Snake Charmer comes clear right from the start, with the violin instrumental opener, “In Dreams, We Discover Ourselves, Broken and Yearning” (Hart seems to have taken his song-titling from another man with a penchant for ‘snake’-titled records, Spencer Krug-as-Sunset Rubdown – QRO live review).  And the record ends with a violins-into-grand strings coda “In Dreams, We Return to Ourselves, Empty and Honest”.  Only a few pieces see guitars take center stage, and when they do, such as on “No More Sleeping in the Shadows” and “Song for Wishing Well (Not Everything Is Possible)”, the rock feels grinding and ill fitting.  However, an exception must be made for “Song for a Snake Charmer”, whose darker rock and heavy guitars, with an excellent group chorus-cry, abandons the strings to “Sing your favorite song! / At the top of your lungs!”

Most of the time, though, the focus is on the strings, and that has allowed Hart to go truly grand and orchestral, and when he does, the record is at its best.  Post-opener “Destiny Reveals an Unbelievable Truth” is a growing daybreak, while “Like White Blood Filling a Black Heart” plays moving.  The finest is probably “Why Can’t We Fall In Love Forever? (Anything Is Possible)”, which brings a dance-swing to the grandness, as well as a stompin’ soul.

However, when Hart gets more restrained, his vocals become more and more important, and his flat voice just lets the listener down.  Sometimes some female vocals back him up, like on “Around the Bend”, but they can’t overcome it when his voice is paramount, like in that otherwise quiet, harp-pluck piece.  Hart’s poor vocals perhaps hit hardest at the end, with the two pre-closer tracks “Aeroplanes and Hurricanes” & the title number: while “Aeroplanes” does have good, grand moments, “Snake Charmer and Destiny at the Stroke of Midnight” focuses on Hart’s vocals throughout (as well as going on too long).

In making such a grand record, Hart did get help from friends like St. Vincent herself, Annie Clark (QRO interview), and fellow North Carolinian Adam Baker (QRO interview), of Annuals (QRO spotlight).  But Snake Charmer and Destiny at the Stroke of Midnight is truly his record, and rises & falls on his strengths & weaknesses.