The Twilight Sad : No One Can Ever Know

<img src="https://www.qromag.com/wp-content/uploads/2012/03/thetwilightsadnoonecaneverknow.jpg" alt="The Twilight Sad : No One Can Ever Know" /><br /> On their latest album, Scottish brogue-sters The Twilight Sad have traded in the towering, amplified atmospherics... 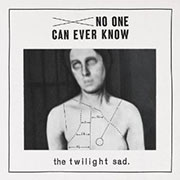 On their latest album No One Can Ever Know, Scottish brogue-sters The Twilight Sad have traded in the towering, amplified atmospherics of Fourteen Autumns and Fifteen Winters (QRO review) and Forget the Night Ahead (QRO review) for a pared down, minimalist take on their now-familiar brand of Northern misery.  For the uninitiated, the shift from their first album to their third is roughly analogous to that of My Bloody Valentine releasing Kid A (Forget the Night Ahead is the Hail to the Thief of the piece).  No One Can Ever Know is a huge departure for the group but one that doesn’t feel well thought out, unlike, for instance, The Horrors (QRO live review) repeated impressive reinventions of their sound.  The Twilight Sad seem to be desperately grasping for a new direction but just miss the mark here.

The album is not without its charms; tracks like “Sick” and “Don’t Look At Me” are pleasant in their own grim and gothic manner.  Much of the rest of the album however feels like filler, not hitting hard enough lyrically or musically to leave an impression.  Part of the issue here is that the songwriting just isn’t as worthy as in previous efforts, but much of the blame also must rest with the range of new devices, electronic and otherwise, that the band have used to flesh out their sound.

On their latest, The Twilight Sad have expanded the range of tools at their disposal, roping in vintage analogue synthesizers and an assortment of other tricks in an attempt to renew their sound.  These often fall flat however.  Case in point, the vocal effect employed by James Graham throughout No One Can Ever Know seems a strange affectation; he’s a strong, distinct vocalist and the added layer only serves to undermine his contributions.  Similarly, though the analogue synthesizers that the band has so readily embraced on this album do effectively shift their sound into a different realm, it’s hard to argue that it’s a better one.  They’re too pervasive and weak-sounding, with the new focus highlighting the group’s relative inexperience with these instruments, at least when compared to the obvious skill they employed on previous records in forcing their guitars to ever greater caterwauls.

This album feels like another disappointment after the underwhelming Forget the Night Ahead and it’s crushing to see.  Fourteen Autumns and Fifteen Winters was such a powerful debut, which so clearly captured a band filled with creative initiative and raw talent.  Here they sound like they’re reaching too far to reinvent themselves.  Near the conclusion of the album though, on “Another Bed”, the band finally gets all the disparate pieces to slot together constructing a monstrous krautrock automaton that provides a glimpse at what this band is still capable of.  It’s a testament to the strength of the band that this album is still littered with moments of beauty but after the full run-time has lapsed its difficult to pick them apart from the sonic detritus that’s accumulated around them.