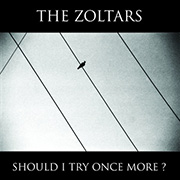 A lot of bands lose what made them good in the first place when moving from a lo-fi, raw sound into the production of a studio.  The Zoltars debut Should I Try Once More? on Sundae Records is a rare example of a move into polished clarity serving to highlight already great songwriting.

The massive effects and rough arrangements were a big part of the charm on their self-titled seven-inch.  Through reverb soaked, loose guitar, Jared sang about voodoo, homicide, and Partying at the Bat Cave.  Delivered at times in an offhand, barely sung melody, it was a great combination of not taking themselves too seriously while getting at the joke in their own sincere way.

On Should I Try Once More? they’ve taken the basic elements of their trio, two guitars and drums, and forced the minimal arrangement to shine clearer, cooler, and a little darker across ten tracks.  The songwriting itself has remained deliberate and clear cut, with a precision and warmth to the lonesome guitars over their particular brand of primitive rhythm.  On the first track, "Lost From Long Ago", they combine the repetition and bleakness of The Velvet Underground with a jagged minimalism of Gang of Four.  They’ve taken a post punk march and laid Jared’s ‘50s era Bobby Darin vocal over it.  It’s a little nasal, counteracted with doses of backup harmony, but never quite escapes seeming alone.  The melody is delivered in lockstep time and Jared’s singing is so close you can hear him breathing.  This ghostly surf sound walks the line between calculated and dehumanizing, like a robot that’s wondering why there’s water coming out of his eyes.

"You Can Take It If You Want" deals with being completely powerless, the vocal full of overwhelming tension and when a gun is pulled, it feels as if this track could explode any moment in the narrative and instrumentation.  Their minimal sound creates a sense of unease and suspense; somehow it’s more dangerous when it’s quiet.  The track picks up as a knife is pointed at our protagonist on a plane, and The Zoltars seem to enjoy this contradiction of being intensely serious in the middle of some kind of absurd dream.

It’s also about love in all of its misguided, haphazard forms.  On "I Took Your Girl Away" he’s talking to the guy who used to be with his girlfriend, driving the knife in further, telling him that she "chose a man full of hate."  Twisting this situation around to be about him, the girl is of little consequence.  The psychosis sets in on "Once Upon a Midnight Ride", homage to "Dead Man’s Curve".  He can’t live up to how perfect this person is, and literally inanimate objects are telling him to leave her… over and over.  There are no happy endings in The Zoltars vision; it’s the dark humor of spy versus spy blowing each other up over and over.

Drawing as much from The Zombies as The Johnny Ill Band, the entire album is dense, but quiet; the guitar strums are few and far between, forcing an awareness of the silence as much as the bare melodies themselves.  The randomness of a decaying echo is as important as the deliberate direction.  It’s a subtle, unassuming album and that’s ultimately what makes it so disarming and listenable…  catchy but you wouldn’t dream of singing along.

Should The Zoltars try once more?  This is just the beginning.

MP3 Stream: "You Can Take If If You Want"

{audio}/mp3/files/The Zoltars – You Can Take It if You Want.mp3{/audio}
Tags
The Zoltars
Categories
Album Reviews
OLDER ARTICLE