The bumble bee girl from Blind Melon's "No Rain" music video grew up and her name is Merril Garbus, a.k.a. tUnE-yArDs. ... 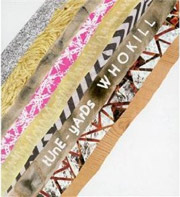 The bumblebee girl from Blind Melon’s “No Rain” music video grew up and her name is Merril Garbus.  Come to think of it, her unchained vocal stylings find an aural cognate in the meandering wail of Shannon Hoon.  Fans of the first tUnE-yArDs album, BiRd-BrAiNs already new about Garbus’ pipes though, instead they’ll be surprised by the electronic key-tones found in the opening track, “My Country”.  w h o k i l l has been called poppier than BiRd-BrAiNs, a more useful distinction between the two albums is that the newest release benefits from greater clarity.  Most significantly, the content of Garbus’ lyrics can be understood in a way that was just not possible on her ultra lo-fi debut.  W h o k i l l enjoys increased production value on the back of the influential 4AD record label (Ariel Pink, Atlas Sound, Bon Iver, Deerhunter) and has not diminished the artist’s ability to convey emotions that are the artist’s own, sentimental but not sappy, world-wise but not ironic, self-confident but not self-centered.

While listening to the rhythmically complex, but lyrically incoherent “Hatari” off of BiRd-BrAiNs, you might think “they’re” African, not from New England, as is the actual case.  There is something to this recognition, the former puppeteer once hosted a radio show centered on African music and has also spent time traveling through the continent. The role of the voice in African music can not be overstated, in part due to tradition and also due to lack of access to instruments, more is asked of the voice in places like Kinshasa and Nairobi than in Brooklyn or Montreal.  A track like “You Yes You”, is determined so singularly by the vocal performance that not much is asked from the rock three-piece that accompanies her, and not much is needed, just churning guitars and some snare drum up front in the mix.

Click here for photos of tUnE-yArDs at Hudson River Park in New York, NY on July 14th, 2011 in the QRO Concert Photo Gallery

Click here for photos of tUnE-yArDs at 2011 Primavera Sound Festival in Barcelona, Spain in the QRO Concert Photo Gallery

Click here for photos of tUnE-yArDs at Music Hall of Williamsburg in Brooklyn, NY, on May 21st, 2011 in the QRO Concert Photo Gallery

Click here for photos of tUnE-yArDs at Brighton Music Hall in Boston, MA on May 16th, 2011 in the QRO Concert Photo Gallery

Click here for photos of tUnE-yArDs at Lincoln Hall in Chicago, IL on May 10th, 2011 in the QRO Concert Photo Gallery

Click here for photos of tUnE-yArDs at Central Park SummerStage in New York, NY on August 1st, 2010 in the QRO Concert Photo Gallery

Further the field recordings that abounded on BiRd-BrAiNs are a bit more sparsely deployed on W h o k i l l, and one imagines that they could be eliminated altogether without much detriment to the rest of the album, the amount of theater and sound packed on to this ten track, 42 minute LP is enough to set itself apart from your average Tuesday’s CD release.  Having said that, the sirens at the beginning of “Gangsta” bleed into her own increasingly distorted vocals and add a presence to the music that transports you to the singer’s adopted home of Oakland.

“Wolly Wolly Gang” is the albums longest song at just over six minutes.  The slow burner with looped guitar/ukulele sneaks up on the listener, the song is perfectly at ease amongst the more intense and energetic offerings on the album, with simple atmospheric instrumentation creating a platform for Garbus’ lyrical wordplay to develop – sometimes with innocence, other times with a breathy insistence.  This shifting sense of balance is high among the album’s virtues and extends to the sequencing of the tracks themselves, the bluesiness of “Powa” is the perfect chaser to the rowdiness of “Gangst”, and the same could be said for the open spaces in “Doorstep” that allow some breathing room after the cacophony of the lead single, “Bizness”.  The closing track, “Killa”, has that tin can ukulele sound that, paired with quirky playing, gives it that North by Northwest African song that she is sometimes credited with, in an interview she called it her “PYT”, in reference the closing track of Thriller.

As NYC residents learned on July 14th at Hudson River Park (QRO venue review), these songs DO translate to a killer live experience (QRO photos), an intense exercise in jogging on loop pedals while reaching for the stars with singing that at times approaches yodeling.  Those who have not had the chance to see tUnE-yArDs, a live experience which includes bassist Nate Brenner and the saxophone duo of Matthew Nelson and Kasey Knudsen, will once again have the chance as the group has just announced a new set of North American tour ending in New York on November 21st.