Ernest Greene is just as relaxed and beautiful as you wanted him to still be.... 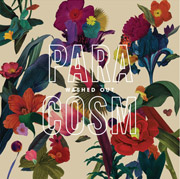 Once upon a time, alternative musicians played guitars, keyboards were for sidemen or girlfriends, and laptops were just computers – but then came ‘chillwave’, which brought keyboard sounds produced on laptops, made & mixed in bedrooms, to the indiesphere.  Now leading indie lights look more like shy DJs, behind their tables, until & unless they recruit a full band and go full bore.  One of the first at chillwave was Ernest Greene (QRO interview) as Washed Out, who helped start not just the bedroom sound, but also coming out of the bedroom & getting a whole band (QRO live review), first on Life of Leisure EP (QRO review), then debut full-length on Sub Pop, Within and Without (QRO review).

So how does the chillwave pioneer hold up in his sophomore release, Paracosm, now that he’s no longer the new kid on the block with the shiny new toy?  Very well, as he’s just as relaxed and beautiful as you wanted him to still be.

From the opening notes of instrumental intro “Entrance”, Paracosm is a very natural record, with sounds of woodwinds and even heavenly harps twinkling and sustaining.  The whole album feels like an early summer day as a kid in the woods behind your house, with the sun shining through the leaves of the trees, the grass still a little wet from last night’s shower.  There are moments when more modern synths come up, such as the synth-ier following “It All Feels Right”, and light disco subsequent “Don’t Give Up”, but this is not a release for da club.  Instead, it is relaxing without being lazy, chill without being drowsy – “All I Know” and closer “All Over Now” can’t help but put you in a good mood, in a good frame of mind.

The summer has to end, and the woods behind your parents’ house have been cut down for a half-finished development, but Ernest Greene doesn’t need to leave the green, but rather invites us all into his beautiful day on Paracosm.

Washed Out – All Over Now