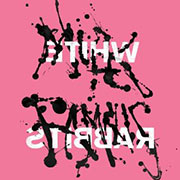 When Columbia, MO-by-way-of-(where else?)-Brooklyn White Rabbits debuted in 2007 with Fort Nightly (QRO review), they were slotted as a more saloon dancehall version of friends/tourmates/boroughmates The Walkmen (QRO live review).  But on tour with The Walkmen & Spoon (QRO live review), they recruited Spoon main man Britt Daniel to produce their follow-up, It’s Frightening (QRO review), which saw a major leap both forward and to the side, as the Rabbits left the saloon for a percussion-based advance in ability.  With Milk Famous, the group even further leaves behind their western beginnings for tech-sly operations – and they somehow still manage to pull it off with aplomb.

Right from the get-go with leadoff track/single "Heavy Metal", the listener knows that this isn’t the band that did "Navy Wives" (a Nightly song they don’t play anymore) – but it’s not even the band that did "Percussion Gun" (QRO video), Frightening‘s leadoff track/single.  Just as "Percussion" had previously let the listener know of the White Rabbits’ shift into percussion for Frightening, "Metal" (which thankfully isn’t heavy metal…) debuts the band’s new tech-sly/dark style.  And just as the shift with Frightening was a risk that the band conquered, so is that with Milk – "Metal" burrows into you with anxiety.

There’s a definite current of anxiety throughout the tech of Milk Famous – "Metal" and the similar, but more active "Temporary" are the most clear about it, but "The Day You Won the War" has an anxious energy, and the preceding "Back For More" is a more reduced version of it.  There are softer pieces, but even there the tech-anxiety crops up, such as the echo-distance to "Hold It To the Fire" or tech moments on the more acoustic closer "I Had It Coming".  Even the (relative) catchiest piece on the album, "Everyone Can’t Be Confused", or the pressing bass of "Danny Come Inside", is peppered with tech elements.

After the enjoyable Fort Nightly, it was natural to at first not only be thrown off by the White Rabbits’ change with It’s Frightening, but also to be a bit disappointed you weren’t going to get Fort Nightly II – only to realize the greatness of Frightening after more spins.  Now it’s natural to be thrown off by the White Rabbits’ latest change on Milk Famous (maybe one can consider it It’s Frightening II: Electric Boogaloo…), but more spins will once again showcase the band with another great new sound.

Pop Will Eat Itself : Live