<img src="https://www.qromag.com/wp-content/uploads/2010/06/wildmoccasinsskincollision.jpg" alt=" " />T<span style="font-weight: normal">he kids are kids no matter where they are, and Houston natives Wild Moccasins bring an up-stroke cheer to their full-length debut, <i>Skin... 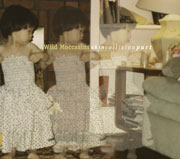 Houston may be a lot of things – fourth-largest city in the country, center of the U.S. oil industry, first major city to elect an openly gay mayor, ground zero for George Bush’s (either one) America – but it’s not a musical hot-bed.  It’s deep in flyover country, with musical Texans heading to ‘Live Music Capital of the World’/home of South-by-Southwest (QRO recap) Austin or, as The Grateful Dead put it, “Houston – too close to New Orleans” (for a modern reference to you Dead-haters out there, even R.E.M.’s “Houston” is about the post-Katrina Big Easy).  And the city is too far from the heart of the Confederacy or the Great Plains for country, and not close enough to the border for Latin-inspired musica.  Even Norman, Oklahoma has The Flaming Lips (QRO live review) & its own festival (QRO recap).  But the kids are kids no matter where they are, and Houston natives Wild Moccasins bring an up-stroke cheer to their full-length debut, Skin Collision Past.

While the Wild Moccasins aren’t quite as young as they look (though singer/guitarist Cody Swann’s mustache ain’t fooling anyone – QRO photo), they do have the energy of people so young it makes you feel old.  On stage they can look like a younger version of the already-young Ra Ra Riot (QRO spotlight on), but on Skin they go for a more smiling, toe-tapping sound – and that’s where they’re at their best.  Dance-step meets a road gallop in the most enjoyable of ways on pieces back-to-back-to-back “Its Health & My Own”, “Late Night Television” and “Psychic China”, not to mention the big jumble of good times that is the record’s titular opener.

Click here for photos of Wild Moccasins at SXSW 2013 in Austin, TX in the QRO Concert Photo Gallery

Swann and singer/keyboardist Zahira Gutierrez also put together some nice male-female dueling-duets, such as on the fifties duet-meets-modern up-stroke “Calendar”.  But when Wild Moccasins trade in that catchy rhythm for more of a sway, Skin does suffer somewhat.  The chorus lifts “Chapter Four”, but “Cake” and closer “Zylophone” miss the energy that is the band’s strong suit.  Also, they are best when dueting – Gutierrez-led “Cake” and “Born Blonde” lack that extra flavor.

Last year, Houston got its own indie music festival, the just-held Free Press Summerfest (QRO Festival Guide), and Wild Moccasins have played both years (but missed out Norman’s this year thanks to car trouble…).  So, for once, keep an eye on the young, up-and-coming Houston.