Wolf Parade know how to deliver their signature sound, while also keeping it fresh.... 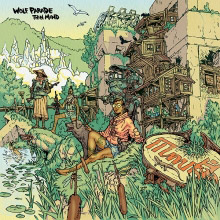 Click here for photos of Wolf Parade at 2016 Pickathon in Happy Valley, OR

Click here for photos of Wolf Parade at 2016 Northside Festival in Brooklyn, NY

Click here for QRO’s review of Wolf Parade at Bowery Ballroom in New York on May 17th, 2016

Click here for QRO’s review Wolf Parade at Crystal Ballroom in Portland, OR on July 27th, 2010

Once upon a time, Wolf Parade were part of the ‘Canadian Invasion’ of indie acts in 2000s, but always stood a bit apart, with a sound far more frenetic than the usual grand north-of-the-border collective. They also knew how not to overstay their welcome, going on a hiatus 2011-2016 while members did other projects, both solo & team-ups. Return Cry Cry Cry (QRO review) was a great return of their sound, and Thin Mind follows that up.

It can be said that Wolf Parade haven’t radically changed their style since their breakout, but they haven’t really needed to, as no one else is really doing it. The anxiety in songwriters Dan Boeckner & Spencer Krug has given them a definite signature, but it isn’t one-note. Opener “Under Glass” is a cheerier spin on it, while “Forest Green” wracks one’s nerves. “As Kind As You Can” warbles in uncertainty, yet “Wandering Son” is catchier. In an interesting development, the synths to “Against the Day” have a ‘music of the future world’ feel like the recently defunct Yeasayer (another band that didn’t sound like anybody else).

Wolf Parade aren’t going to reach the heights of fellow Montrealites Arcade Fire, but they don’t need to. They know how to deliver their signature sound, while also keeping it fresh.

Radio.com The Night Before Concert Preview