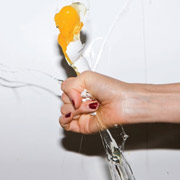 Many of the indie-rock acts that emerged out of the Lower East Side/Williamsburg music scene in the earlier part of this decade declined after their breakthrough (like Interpol – QRO album review), or even faded away (like The Strokes), as new acts came to the fore (often from deeper parts of Brooklyn).  The Yeah Yeah Yeahs blew up in 2003 with Fever To Tell and single “Maps”, particularly making a celebrity out of singular singer/frontwoman Karen O, yet they managed to stay relevant in the mainstream and the alternative, charting and winning plaudits with 2006’s follow-up, Show Your Bones.  And with It’s Blitz!, the band doesn’t lose that, despite a noted shift from indie-garage-rock to electro-dance.

Click here for photos of Yeah Yeah Yeahs at House of Blues in Boston, MA on May 12th, 2013 in the QRO Concert Photo Gallery

Click here for photos of Yeah Yeah Yeahs at Brooklyn Bowl in Brooklyn, NY on December 16th, 2011 in the QRO Concert Photo Gallery

That shift comes out right from the get-go with leadoff track/single “Zero”, which sees the Yeah Yeah Yeahs embrace disco-dance, albeit with some rock press, as Karen O’s vocals go disco-diva.  However, the whole thing is done better on the following should-be-single (and probably will-be – the band played it, not “Zero” on Saturday Night Live – QRO Indie on Late Night TV) “Heads Will Roll”, as the band goes bigger, and keeps more of their indie-rock.  In general, It’s Blitz! is better whenever the dance portions are more evenly balanced with the rock – there’s a million-and-one electro-dance acts out there doing higher stuff like Blitz!’s “Soft Shock” or “Skeletons”, and the synth-heavy “Shame and Fortune” & “Dragon Queen” are nothing special.  But “Dull Life” is anything but, thanks to its catchy indie-rhythm, and “Hysteric” is strengthened by the haunt and power that made “Maps” so memorable.

“Little Shadow” follows “Hysteric” to close out It’s Blitz! as a high, sad, slow, epic coda to the band’s shift in sound.  Was the reinvention needed?  Given the time between Fever and Blitz!, one would say not.  But given the pressure the band was still under, thanks to their fame & fortune, it might have been.  While not working 100%, It’s Blitz! keeps the Yeah Yeah Yeahs relevant and opens them up to new fans.