<img src="https://www.qromag.com/wp-content/uploads/2010/04/youngadultsyoungadultsep.jpg" alt=" " />Young Adults are a loud and fast trio out of Allston, MA with a certain Billy Idol-esque predilection for tossing off snarly, ballsy lyrics... 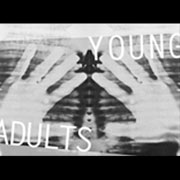 Young Adults are a loud and fast trio out of Allston, MA with a certain Billy Idol-esque predilection for tossing off snarly, ballsy lyrics against aggressive punk backdrops.  The five songs off their self-titled debut EP would make a fantastic soundtrack to falling down a staircase or smashing into a pylon.  Since that’s basically the plotline to every surf-n-skate video, the Young Adults, with track titles like "Rip It Up" and "Bummer Summer", clearly knows their audience.  A more nuanced style of songwriting (sometimes obscured by the production) lifts the band above the regular run-of-the-mill alt-punk.  Especially notable is the standout single "Impression" that sounds like Nirvana (QRO DVD review) covering Weezer (QRO live review): pop hooks bathed in feedback, minus the Rivers Cuomo wankery.

The underground music scene in Boston seems to be riding a wave lately – even MTV’s Real World has come calling to Allston (a likely death knell).  There’s a number of quality garage acts like Beach Hair and Earthquake Party! that are presenting an alternative to over-orchestrated indie.  Young Adults distinguish themselves by a total commitment to the wall of sound: super-saturated guitars fill out the aural register with a shoegaze-y ambience, while the drums and vocals reel the sound back into the punk realm.  "Rip It Up" begins with a Silverfuck-style guitar progression that would have sparked instant moshing in the mid ‘90s.  "Annulation" and "Let Us Out" send up an eardrum-shattering volley of sonic froth through which the vocals and drums peak, like peaking through amphetamine-glazed eyeballs.  It sort of reminds you of what Velvet Underground live joints must have sounded like: loud as hell, but with an irresistibly pulsating momentum that articulates the white noise into a nervy catacomb of rock frissons.

Click here for photos of Young Adults at Great Scott in Allston, MA on August 20th, 2011 in the QRO Concert Photo Gallery

Click here for photos of Young Adults at 2011 Northside Music Festival in Brooklyn, NY in the QRO Concert Photo Gallery

The self-titled EP makes for a great introduction to a band that doesn’t skimp on attitude.  With some nice write-ups in the U.S. and Europe, plus local radio support from WERS, the trio certainly has left an "Impression".  Add a few more high caliber songs into the mix and Young Adults could be poised to receive the same sort of love currently being showered on local garage favorites Thick Shakes (QRO album review) and Girlfriends (QRO album review) by the Boston music scene.  Definitely a band to keep an eye on.