Adam Ant made a triumphant return to Portland, and proved that he is still King of the Highway Dandymen.... 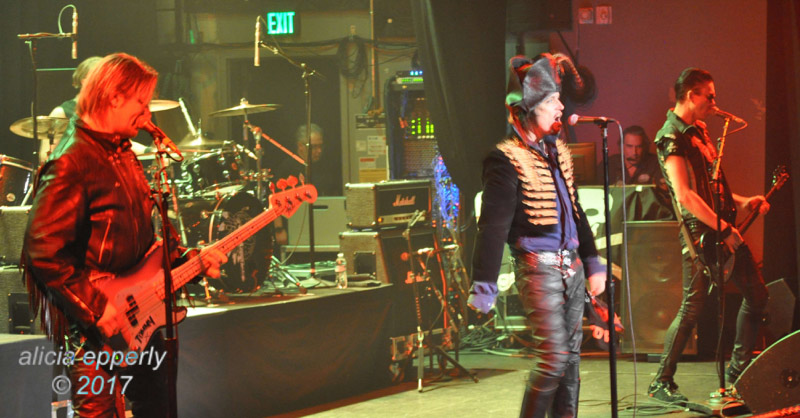 Click here for QRO’s review of Adam Ant at Roseland Theater in Portland, OR on September 8th, 2013

Adam Ant made a triumphant return to Portland on Thursday, February 2nd at Revolution Hall, and proved that he is still King of the Highway Dandymen. Performing the Kings of the Wild Frontier album in full was a well-made decision for this sold out tour. The tour had started out well, but after the second show lead guitarist and musical director Tom Edwards tragically passed away. After the cancellation of the next two shows the tour resumed, albeit with heavy hearts.

Kicking off with opening track “Dog Eat Dog”, Ant and his band had the crowd jumping. With two drummers providing the Burundi beat, the songs kept coming, with barely a spoken word from Ant. This tour was the first time that “Feed Me To the Lions” had been played live and it was well worth the wait. The animated crowd sang along to every song, and Ant seemed pleased that even some of his deeper album tracks were remembered by his fans.

Ant addressed the crowd after the final track of Kings of the Wild Frontier with a, “Good evening Portland! Here’s a few of my favorites,” and then promptly launched into “Beat My Guest”. The back-to-back of “Stand and Deliver” and “Viva le Rock” launched the crowd of over 800 into frenzy. Ant could have stopped the show here and everyone would have been satisfied, but he had ten more songs to go. “Goody Two Shoes” received the loudest audience response and it seemed like everyone was singing along. He wrapped up the show with a great cover of “Get It On” by T. Rex followed by “Physical”. Ant, with palms together in thanks, gave a quick bow and said goodnight.