Who could resist Anna Calvi's unbreakable energy and her implacable guitar mastery? Who?...

Click here for photos of Anna Calvi at Cockpit in Leeds, U.K. on November 16th, 2011 in the QRO Concert Photo Gallery

Click here for photos of Anna Calvi at O2 Academy Brixton in London, U.K. on December 7th, 2010 in the QRO Concert Photo Gallery

Click here for photos of Anna Calvi at XOYO in London, U.K. on November 29th, 2010 in the QRO Concert Photo Gallery

“Today it’s almost impossible to write something new, but if you can express yourself in a unique way, you’re most likely to succeed.”  David Bowie said something quite like this almost a decade and a half ago, which is absolutely true.  Nothing new and exciting, but true nonetheless.

One artist who’s a bit difficult to classify (that thing we all do, labelling somebody, to try and get an idea of what they do) is Anna Calvi.  Not only because her work, a unique mix of influences, but also because of the people it has reached – fashion collectives, most of the British press, chaps like Nick Cave or Brian Eno and so on…

Her second work, One Breath, changed many bits from its predecessor, like her producer, but it kept many ingredients of her music, like that sort of mystery and magnetism that fluctuates between the subtlety and the electric storm, the calm and the bursts of sound and light.

That aspect of her music is better revealed on stage, like on Sunday, March 23rd.  Accompanied by Canadian singer-songwriter Chloe Charles on supporting duties (QRO photos – especially good is her record Break the Balance), Calvi displayed at Amsterdam’s Paradiso an uncomplicated and mysterious yet effective image – even more than usual – and mixed the tracks from both her records plus a cover of Bruce Springsteen’s Fire. 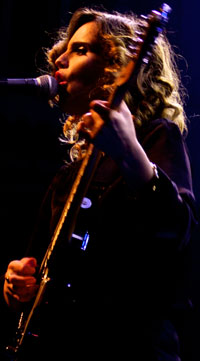 Especially brilliant were “Cry”, “First We Kiss”, “Bleed Into Me”, and her classics, “Love Won’t Be Leaving”, with which he ended the first part, and “Jezebel” (of course!).

One strange thing yours truly has read a couple of times in different media outlets is that One Breath has been more rushed in recording time than her debut record and that, because of that, the overall result seems lacklustre and kind of ambiguous.

That is a different record compared to Anna Calvi but onstage those appreciations lose power as Calvi’s repertoire verges on the, say, omnivore, on exposing a variety of ideas and sounds and feelings that, okay, it may take some time to assimilate, but in the end they simply work as all melodies find a place in which they don’t conflict with each other, much rather the opposite.

Plus, the Englishwoman is not the kind of artist that secludes herself or ignores her environment and that definitely helps to achieve a cohesive and coherent performance.

And who could resist her unbreakable energy and her implacable guitar mastery?  Who? 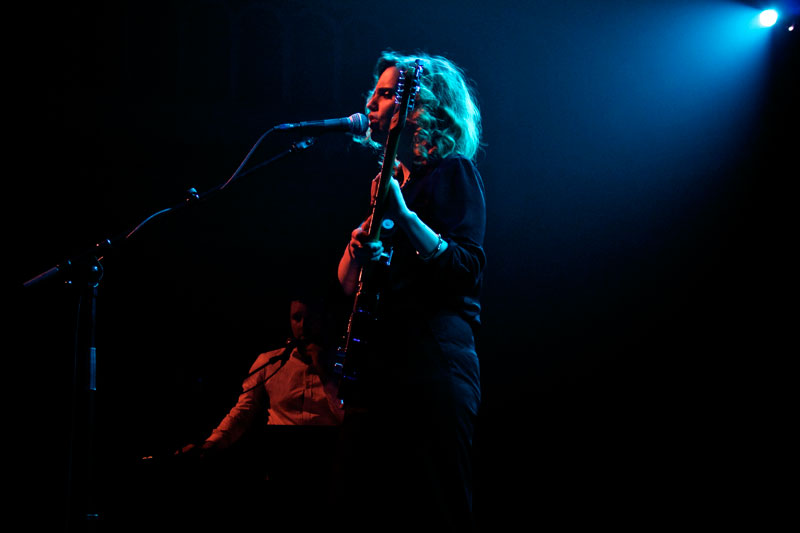 Middle of the Map 2014 Preview