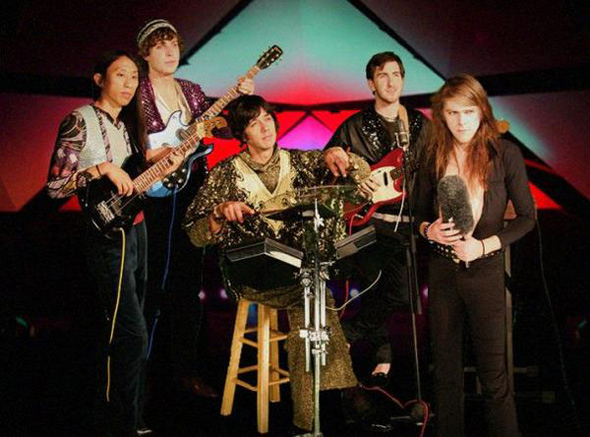 Ariel Pink’s Haunted Graffiti have infiltrated the hearts and minds of the trendy music elite in the past year.  Celeb recommendations and excited fans have gravitated to them and their insane brand of psychedelic indie.  On Friday 13th of May, London’s Koko provided a suitable theatrical setting for the eccentric troupe.

Starting with two older numbers, “Oceans of Weep” and “Helen”, the band didn’t quite win over the audience until their first track from most recent record, Before Today (QRO review).  Although clearly enjoying everything that was thrown at them, the crowd was more enthusiastic about newer songs, perhaps suggesting that the band should be more forward thinking than nostalgic.  “Round and Round” was the highlight of the show, played to perfection and whipping fans into a frenzy.

All songs were performed with polished finesse showing the musical ability of everyone on stage (which included a member of the audience keen to join the band for a dance during “Thespian City”).

The sound transcended the usual substandard acoustics of Koko and, although facing the wings for much of the gig, Pink is marking himself out as a passionate frontman worthy of the hype that surrounds him and his band.